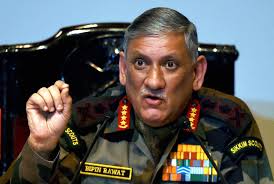 “There is no intrusion,” the Army Chief said on the sidelines of an event on “20 Years after Kargil Conflict”.

His statement comes amidst reports of Chinese soldiers crossing the Line of Actual Control (LAC) last week after some Tibetans hoisted Tibetan flags on the occasion of Dalai Lama’s birthday on July 6.

“Chinese come and patrol to their perceived Line of Actual Control… we try and prevent them. But at times there are celebrations that take place at the local levels. Celebrations were going on our side by Tibetans in the Demchok sector. Based on that, some Chinese also came to see what was happening. But there has been no intrusion. Everything is normal,” Gen Rawat said.

The Army Chief also warned that any misadventure by Pakistan Army will be repelled with punitive response and no act of terror will go unpunished.

Gen Rawat said, “The Indian armed forces stand resolute and ready to defend our territorial integrity. Let there be no doubt that misadventures will be repelled with a punitive response.”

The rise of non-state actors and the readiness to use terror and other irregular methods of fighting have become a new norm, he said, adding that the addition of cyber and space domain has changed the battlefield scenario.

Bhubaneswar-Dubai Flight: To Be Or Not To Be?