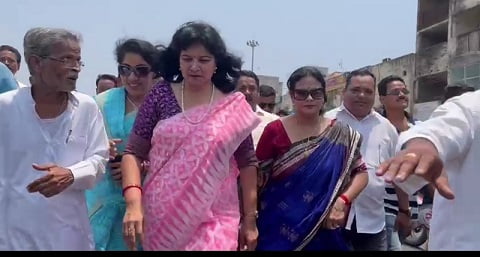 Bhubaneswar: BJP leader and Bhubaneswar MP Aparajita Sarangi, who was at the forefront of the faceoff between the BJD government and the opposition parties over the Puri Heritage Corridor project, once again attacked the Odisha government after the Archaeological Survey of India (ASI), in an affidavit filed in the Orissa High Court, said no valid permission or no-objection certificate (NOC) has been given for the ongoing construction work around the Jagannath Temple.

“The joint inspection note filed by ASI, as part of its affidavit,in the Hon’ble High Court,is worth reading.Very meticulously prepared. It says all; the wrongdoings of the State Govt are crystal clear,” she tweeted.

“So much of public money is being spent on forcibly creating infrastructure which could easily be created beyond 100 metres. If the structures are declared illegal tomorrow who will be responsible for wastage of hundreds of crore of rupees which is the hard earned money of Odias?” she said in another tweet.

“After filing of ASI’s affidavit before the Hon’ble High Court today, I am convinced that Lord Jagannath is trying to save Himself and His temple from an elected State Government which is hell bent upon brazenly defying the law,” she tweeted.

The joint inspection note filed by ASI , as part of its affidavit,in the Hon'ble High Court,is worth reading.Very meticulously prepared. It says all; the wrongdoings of the State Govt are crystal clear.

Hope it does.We can only pray to Lord Jagannath 🙏 pic.twitter.com/EdQZ9TTn3S

The MP along with opposition parties in the state has all along alleged that the Odisha government did not have permission of either the ASI or the National Monuments Authority (NMA) to undertake the project, which could potentially pose a threat to the 12-century temple.

Aparajita has on several occasions engaged in a war of words with the state government as well as BJD leader and Puri MP Pinaki Mishra on the issue.

During a visit to Puri last month, she had targeted the MP, saying that “if he was not aware of the goings on pertaining to the heritage corridor project, how do we expect 4.5 crore people of Odisha to know the truth about the construction plans close to the Srimandir”.

Before that also, reacting to Mishra’s statement on the “NOC” issued by the NMA on September 4 last year for construction of a cloakroom, shelter pavilion and toilets within the prohibited zone of the temple, Aparajita said the paper being shown by him was a letter by the NMA and not an NOC.