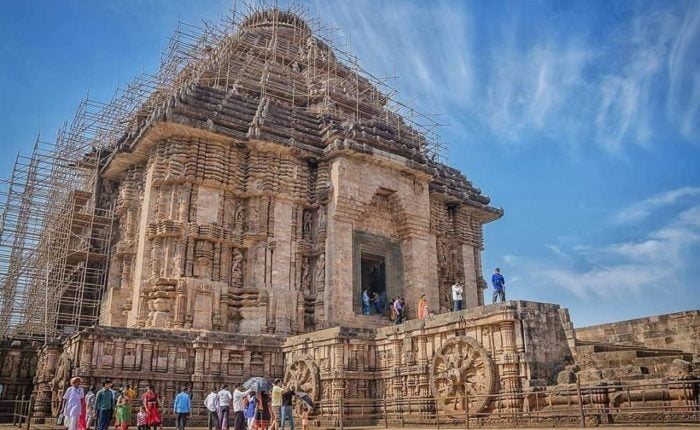 Bhubaneswar: Construction for raising a mechanical working platform has started at the 13th century Sun Temple at Odisha’s Konark to give pace to the process of removing sand from the towering Jagamohan at the world famous site.

As part of its plan, the Archaeological Survey of India (ASI) has started constrcution of the working platform on the western side of the Jagamohan. It will be 14 metre high from the 4.2 metre-high sculpted pedestal on which Jagamohan stands, according to sources.

When the mechanical platform is ready, the process to remove stones over the ‘Antarala’ from the western side of the temple through a 6 ft X 5 ft tunnel, manually created at the location where the British had originally put sand, will begin.

The tunnel will be opened from the top of the western side of Jagamohan near the first pidha to create a passage. The aim is to stabilise the structure and utmost precautions will be taken while evacuating the sand, according to an ASI official.

A structural health monitoring system will be put up in the monument to check the vibrations and tilt before drilling the tunnel at the point which was used by the British to fill in sand and another at the bottom of the ‘Antarala.’

According to the ASI, sand inside the Jagamohan is filled up to a height of 19.8 metres and there is a gap of 5.8 metres. The window will be created 5 to 7 ft below the point where the sand from the top has settled. An internal concrete platform supported by props from the inner cavity will be erected once sand is removed from this point. The ASI will then remove the platform using traditional conservation methods and slowly go down.

During the last over two years since the decision to remove sand from the sanctum sanctorum was taken, the ASI has conducted several studies and surveys, including laser scanning, to get an idea of the structure inside. The edifice of the 13th century has been studied by experts so far as internal geometry, structural condition and the foundation with the help of modern technical devices. Opinion of experts, including archaeologists, engineers, and architects, has also been obtained through seminars regarding the removal of sand from the inner side of the Jagamohan.

The Roorkee-based Central Building Research Institute (CBRI) has conducted studies which assured that the structure is safe enough for this work. As per CBRI’s estimation, the mass of the Jagamohan at top of the plinth level would be a humongous 46,000 tonnes.

After removing the sand, structural repair of vulnerable portions would begin. The repair work can also go simultaneously. After completion of the work, the visitors coming from across the globe to see the beauty of the black pagoda will have a glance of the Jagmohan.

One of the architectural marvels of the world, the 13th-century monument’s Jagamohan (assembly hall) has remained sealed since 1903 when sand was poured inside by the British government to save it from crumbling. The ASI had accepted a proposal to remove sand from inside the Konark Temple, Odisha’s only UNESCO World Heritage Site, at a national conference on ‘Conservation of Sun Temple’ attended by the then Union Culture Minister in February 2020.