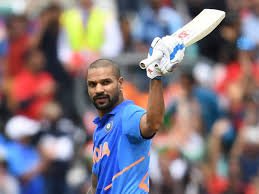 India opener Shikhar Dhawan looks to be ruled out of the ongoing Cricket World Cup for around three weeks following a thumb injury he sustained in the match against Australia on Sunday.

Dhawan, hero of India’s win over Australia at Kennington Oval, played through pain after being hit on the thumb by a rising delivery from pacer Nathan Coulter-Nile.

The Indian opener looked in considerable pain, but carried on to score 117 off 109 balls. However, he didn’t take the field due to the injury during Australia’s innings and Ravindra Jadeja fielded in his place for the entire 50 overs.

The Indian team physio, Patrick Farhart, assessed Dhawan’s condition on Tuesday to see if the opener would be able to take the field during the India-New Zealand match at Old Trafford on Thursday. An official word from the Indian team is expected later today.

The left thumb has been a long-standing issue for Dhawan, who first picked up the injury in 2016 when he was hit by a bouncer on the same spot by New Zealand pacer Trent Boult.

Temperature To Rise Further In Odisha In Next 24 Hours: IMD