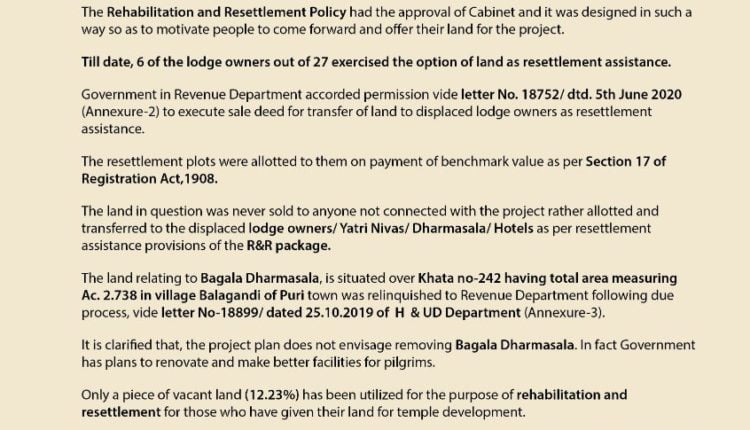 Puri: Amid the cry for the ouster of Puri collector in connection with the allotment of Bagala Dharmasala land, the district administration on Monday clarified that only a piece of vacant land (12.23./0) has been utilized for rehabilitation and resettlement for those who have given their land for the Heritage Security Corridor around Jagannath Temple here.

It further said that the project plan does not envisage removing Bagala Dharmasala. “In fact, the government has plans to renovate and make better facilities for pilgrims,” it added.

Stating that there are some ‘misinformation’ regarding compensation accorded to displaced lodge owners, the administration tweeted that 27 lodges have been displaced and the Rehabilitation and Resettlement Policy approved by the government allowed the owners to opt for either one-time cash settlement or land as an option.

“This MR Package that has all these provisions was widely published in newspapers and leaflets printed and distributed to concerned stakeholders. The Rehabilitation and Resettlement Policy had the approval of Cabinet and it was designed in such a way so as to motivate people to come forward and offer their land for the project,” it said.

The tweet further informed that six of 27 lodge owners have so far opted for land as resettlement assistance. Accordingly, the Revenue Department on June 5 accorded permission to execute sale deed for transfer of land to these displaced lodge owners.

“The resettlement plots were allotted to them on payment of benchmark value as per Section 17 of Registration Act, 1908.  The land in question was never sold to anyone not connected with the project rather allotted and transferred to the displaced lodge owners/ Yatri Nivas/ Dharmasala/ Hotels as per resettlement assistance provisions of the R&R package,” it said.

Elaborating on the R&R policy, the administration said 80 per cent of the land was acquired in record time for the project because it was so good and attractive. “Major projects in the country are stuck up because of land acquisition issues and here is one in the heart of Puri town where people have come forward to sacrifice their business establishments, land and homes,” it said.

This exercise has been done in the most transparent manner, following all legal procedures. The entire issue must be seen in this context and the sacrifice of ordinary people must be honoured, it added.