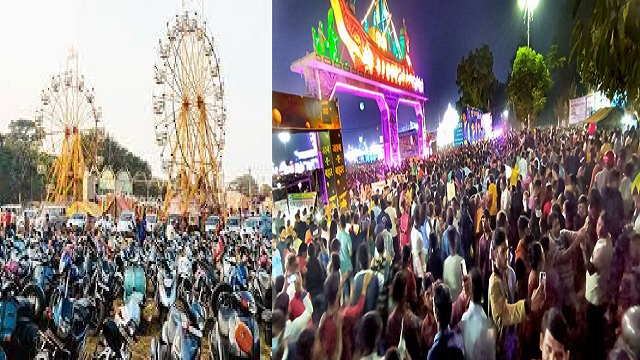 Cuttack: Amid huge footfall at Bali Jatra at Gadagadia ghat in Odisha’s Cuttack, some unscrupulous locals are allegedly collecting illegal fees from people parking their vehicles at available vacant spaces.

According to reports, the ring road stretching from Sikharpur to Bali Jatra got jam-packed when traffic came to a standstill near Jobra Barrage square from 5 pm onwards on Sunday.

As a result, some people who had come from different districts had to park their vehicles at the open space near the Malgodown police station due to the inadequate designated parking lots for the fair.

Several people from Kendrapada were asked to pay the parking fees by the accused locals in the name of the ‘Jobra Durga Puja Committee’. They were collecting Rs 100 from each vehicle and were also handing over receipts from the puja committee.

Looking at the receipts, foul play was suspected and they approached the police. An FIR was also filed at the Malgodown police station based on which an investigation was initiated.

In view of the traffic situation, police opened the gates of two schools near Chandi Chhak on an emergency basis and allowed bike parking free of cost. Around 5,000 bikes were parked on the premises of the two schools.

However, a similar incident also occurred at this spot as an illegal parking fee of Rs 50 was collected for each bike by providing a receipt in the name of ‘Kala Bikash Kendra Motor Cycle Stand’. When countered, the person collecting the parking fee said that a police officer had told him to collect the amount as parking charges.

Several visitors alleged that there is a lack of preparedness for the mega event by the Cuttack Municipal Corporation (CMC).

Meanwhile, the administration decided to form a special squad, consisting of various officials, for better management of the parking lots. The squad will conduct a surprise inspection of the parking lots and initiate action against violators.

“We have already prepared a rate chart for parking of vehicles and the police have been asked to initiate stern action against those who will charge more,” The Telegraph reported tehsildar Subhanand Mohapatra as saying.

He said the district administration had collected a revenue of Rs 10 lakh from the auction of the plots that had been converted into six parking lots at various places around the Bali Jatra ground.

Tollywood Superstar Krishna, Father Of Mahesh Babu, Passes Away At 79