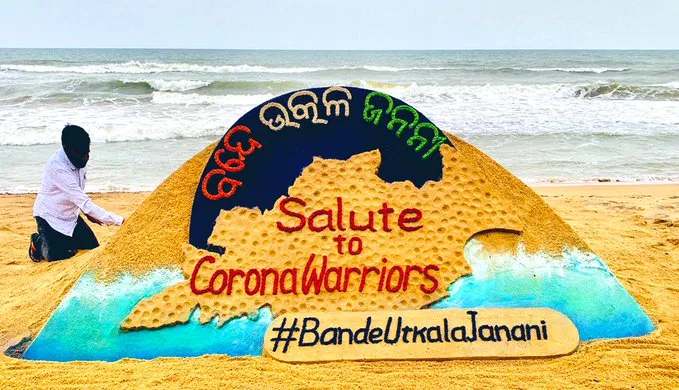 ‘Bande Utkala Janani’, the de facto anthem of Odisha, has drawn fresh attention following Chief Minister Naveen Patnaik exhortation to the people of Odisha and Odias across the world to sing the immortal patriotic song at 5.30 pm on Saturday (May 30) to boost the morale of COVID-19 warriors.

‘Bande Utkala Janani’, which means “I bow to thee Mother Utkala”, is an ode to the land of Utkala (ancient name of modern-day Odisha) and its people. The song is unique in its form and content. Time in and time out the song has stirred the souls of proud Odias.

‘Bande Utkala Janani’, penned by Kantakabi Laxmikanta Mohapatra, underlines the spirit of indomitable Odisha. The song portrays its splendid natural beauty, its past glory, God’s bounty to the State, its holy shrines; its arts, crafts and heritage; its history, culture and literature; its rich tradition and its peaceful social living in the most vivid forms.

Today it is important to revisit the history of ‘Bande Utkala Janani’ in order to get the right perspective. Kantakabi Laxmikanta wrote the song around the same time when Gurudev Rabindranath Tagore wrote Jana Gana Mana, which later became the national anthem of India.

Kantakabi penned the evocative song in the midst of two prolonged movements – the Freedom movement of India and the movement for separate Odisha province. Bande Utkala Janani was used as a powerful weapon by Utkal Sammilani, a socio-cultural organisation that spearheaded  the movement for creation of Odisha as a separate province. The song inspired a whole generation of freedom fighters of Odisha to fight against the British.

The song was first sung in the Puri Session of Utkala Samilani in 1908, three years before Jana Gana Mana was sung at the Calcutta Session of the Indian National Congress.

Four years later, the song was sung at the Utkala Sammilani General Session at Balasore in 1912. Utkalmani Gopabandhu Das and Utkala Gaurav Madhusudan Das were among those who were present on that occasion. Gopabandhu, who was presiding over Utkala Sammilani, was so moved by the song that at the end of the session he hugged a young Laxmikanta with tears of joy coming out of his eyes.

“Today you have made my darshan with Utkala Mata,” Gopabandhu had told Laxmikanta. Madhusudan was also equally overwhelmed by the powerful song. Soon the song had a spellbinding effect across Odisha.

In 2000, then Speaker Sarat Kar ruled that the song should be adopted as the State song and advised the Odisha government to initiate action in this regard.

In 2006, then Speaker Maheswar Mohanty constituted a committee for adopting the song as the State song. At the behest of the committee, Utkal University of Culture selected the first, fourth and last stanzas of the song. The abridged version of the song received the approval of the Department of Culture of Odisha government in 2012.

In 2018, then Culture Minister Ashok Panda said the State “will soon to accord official tag” on ‘Bande Utkala Janani’. But the Naveen Patnaik government is yet to notify the song as the State anthem of Odisha.

It is pertinent to mention that as many as 11 States – including Bihar, Madhya Pradesh, Assam, Karnataka, Andhra Pradesh, Tamil Nadu, and Gujarat – have their own State anthem. But in Odisha, the proposal to accord this timeless song as the State anthem is still hanging fire.

Also Read: Naveen Appeals To All Odias To Join In Singing Bande Utkala Janani On Saturday

The writer is a Delhi based political journalist, policy observer and researcher on cultural history. He has a decade and half long experience, in various capacities, at different media outlets. He is also the Director of Dialogue Odisha Foundation. He tweets at: @SaswatPanigrahi

Know 13 Cities To Have Stricter Lockdown Rules From June 1