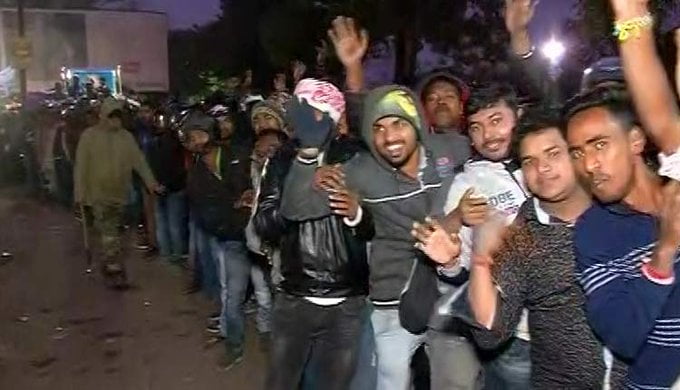 Cuttack/Bhubaneswar: The sale of offline tickets for the third and final one-day international (ODI) match between India and West Indies began at 9 am at 12 counters of Barabati Stadium here on Monday.

The players of both the teams are scheduled to arrive in Bhubaneswar this afternoon.

According to reports, people were seen queuing up at all the stadium counters since last night for the tickets. The counters will shut at 5 pm and the sale of tickets will continue the following day.

While 10,039 offline tickets are to be sold at the counter for two days, sources, however, said that all the tickets will be exhausted the first day itself taking into account the heavy rush of people at all the counters.

To ensure that the tickets are not sold on the black market, police and private security personnel have been deployed at each counter. Besides, the Cantonment Police has made elaborate arrangements to regulate the heavy rush of people near the ticket counters.

The Odisha Cricket Association (OCA) has mandated that each person will be allowed to purchase a maximum of two tickets by showing his/her identify card.

Meanwhile, the players and officials of both the teams will arrive at Biju Patnaik International Airport in Bhubaneswar in a special flight from Visakhapatnam around 1 pm on Thursday. The teams will be taken in two special buses to Hotel Mayfair at Jayadev Vihar amid tight security.

A total of 85 rooms have been reserved for both the teams and eight-tier security arrangements have been made for them inside the hotel premises.

As informed by the Commissionerate Police, the teams will be taken to Barabati Stadium through National Highway amid tight security. To deal with any emergency situation, special commandos will escort the team with the  police.