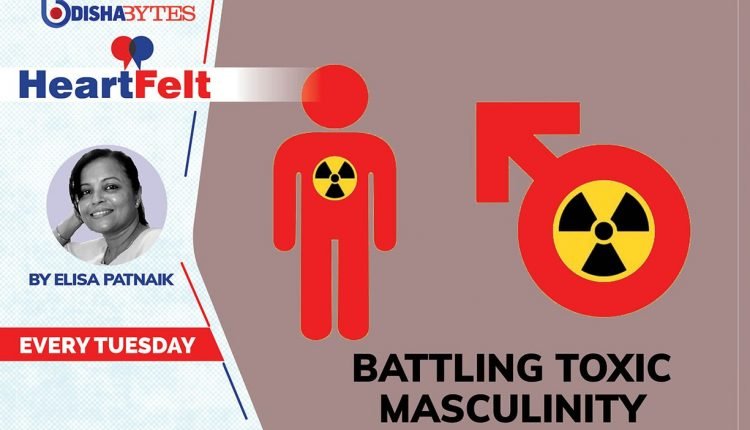 We have all experienced and witnessed instances of toxic masculinity in our real and
reel lives. And increasingly so, in our popular culture, news, and social media in
recent years. The surly college guy who stalks his purported dream girl; The macho
brother who bars his sisters from stepping outside the house out of fear of giving
them too much freedom; The obstreperous news anchor of prime time television who
abuses his guests; The mainstream film hero who is hellbent on destroying his life
and that of his lover if they cannot be united; The anonymous troller who spews
misogynist venom on a pro LGBT post…

People and society’s perception of masculinity was created years ago when physical
strength, sturdiness, aggression, and domination were the foremost traits essential
to fight, hunt and impose power over others which then led to patriarchal masculinity.
With changing times and evolving gender roles, one would have hoped to expect,
experience, and witness a more evolved society with shifting gender norms and the
quest for an equal society with at least a muted and moderate display of masculinity.
Contrary to this belief, however, what we are witnessing more and more nowadays
are glaring instances and newer versions of toxic masculinity being displayed across
societies.

Toxic masculinity is a set of attitudes and behaviour socially and culturally related to
being a ‘male’ or expected of men – displaying strength, virility, chauvinism, lack of
emotion and empathy, self-sufficiency, the dominance to assert power and authority,
aggressiveness, intolerance, hyper-competitiveness, misogyny, a sense of
entitlement and an inclination towards glorifying violence.

This construct emerges from a patriarchal definition of manliness or machismo, which
influences men to adopt their assigned gender roles and expectations. It drives the
notion that men must act “tougher and dominant” than women and other genders
who are usually perceived as “weak, submissive and sensitive.” Toxic masculinists
are also largely anti-feminists, homophobic, transphobic and are hostile to so-called
aberrations against the natural, social, and cultural orders.

Sexual assaults, acid attacks, honour killings, domestic violence, are among the
most common forms of toxic masculinity-fuelled violence continuing in India today.
How often have we come across violence against girls/women who have spurned
advances of their male friends or even strangers?

Common phrases such as “boys will be boys” and exhortations like “act like a man”
and to “man up,” are inextricably linked to society and people’s perceptions of manliness. Others like “boys don’t cry” or “don’t be a sissy” orient males from an
early age to act tough, hide their feelings, not to show emotions or cry, implying that
being vulnerable, showing emotions or understanding other perspectives is unmanly
or anti-masculine.

Boys and men who act otherwise are made to feel humiliated, inadequate, and
weak. They are not only socially and culturally ridiculed but also considered as
“lesser males.” Male adolescents and teenagers often feel the pressure of peers,
family, and society to be manly and are compelled to adopt macho characteristics.

So much so, that a male who ceases to adopt these masculine traits, acts and beliefs
is said to be giving up on his manhood or labelled as effeminate.

The socio-cultural ideologies and practices in India identify physical aggression as a
natural and desirable trait in males. An ideal and real man is supposed to pick up a
fight, be ambitious, ruthless, and extremely competitive, take independent decisions
and not compromise or negotiate with someone allegedly weaker than them.

These practices, norms, ideas, and perceptions work together to create an image
that is detrimental not only for those who bear its brunt but also for those who
practice and perpetuate it. Toxic masculinity is one of the main causes of violence
against women and trans people, social violence, often reinforcing rape culture and
considering women as sexual conquests.

Besides, this perception excuses young males’ irresponsible, violent and destructive
behaviour justifying it as the consequence of their bruised manly egos or typical
‘boys will be boys’ behaviour. Boys and young men are often chided and derided for
not responding ‘befittingly’ to a female’s sharp retort.

The need to remain macho, stoic, strong, not being able to express emotions usually
results in chronic stress, anxiety, violence, substance abuse and psychological
damage in men. Being tough is often achieved by suppressing feelings of
gentleness, empathy, and compassion.

Among the most harmful consequences of toxic masculinity is the belief that ‘real
men’ are in charge of upholding both the prescribed and perceived moral order and
any attempt to challenge it must be put down. They take law into their own hands
and often shift the moral compass from perpetrators to victims.

Toxic masculinity has a lot to do with the ways boys are raised in Indian families and
the way they model themselves over other male members like father, uncle, elder
brothers etc. Sons are pampered, indulged, and preferred in most Indian
families and defending and accepting their sons’ mistakes and misbehaviours are
common. Boys raised in such an environment find it difficult to respect women,
marginalised sections and those different from them, finding it hard to accept opposing opinions. Such boys grow up to be prejudiced, aggressive, intolerant men
unable to accept the empowerment of those considered traditionally weak and
submissive. This aggressiveness often turns into bigotry and violence leading to
displays of toxic masculinity.

A 2014 UNFPA study on “Masculinity, Son preference and Intimate Partner Violence
(IPV) in India,” showed that masculinity in its most rigid form is a strong predictor of
IPV, and men who demonstrated it were 1.35 times more likely to perpetrate IPV
than men who were more equitable in their attitudes and behaviour. The study also
analysed the relationship between childhood experience of violence and IPV where
44% of men who had regularly witnessed/experienced discrimination and violence in
their childhood admitted to violence against their partners.

Glorification and validation of toxic masculinity in popular culture and media often
induces others to emulate and justify such behaviour. According to a recent report
M3: Male, Man, Masculinity – a media monitoring project undertaken by the Network
of Women in Media in India (NWMI) in association Goethe-Institute India –
“Pervasive associations of qualities such as bravery, patriotism and strength with
manhood, social and cultural norms have naturalized and even valorised the
performance of aggressive and overbearing masculinities across spheres, the most
visible being politics and the media.”

It says that such performances normalised through repetition and circulation through
a variety of professional, popular, public, and private networks, have serious
implications for gender relations, apart from severely limiting the possibility of
cooperative, empathetic dialogue. The report indicates how new technologies have
facilitated the circulation of aggressive content on social media and the way social
media normalises toxic masculinity.

The NWMI Report recommends among others, greater diversity of guests on TV
panels and talk shows, a rethinking of the framing and execution of shows,
sensitizing reporters, and managements about the ramifications of overly masculinist
(re)presentations and showcasing examples of a more humane approach to
reporting and news presentation.

The first step towards addressing toxic masculinity is to recognise it, understand it
and speak about it. Working with children, especially boys, during their formative
years on gender equality, is an important way to address masculinity and rejection of
violence. The UNFPA Report advocates mobilising communities collectively through
inter-personal dialogues and engagement of influencers, promoting introspection and
conversations using creative and performing arts that challenge gender stereotypes
and discriminatory norms are other means to address toxic masculinity.

Importantly, elevating and amplifying the voices of women, historically marginalised
communities, LGBT people and involving boys and men as advocates is critical to
reshaping and redefining masculinity at multiple levels – structural, organizational,
community and individual.

More importantly, we all should question, examine, and redefine what it is to be a
man in our own homes, communities, and societies which will surely help in
challenging archaic notions of masculinity.