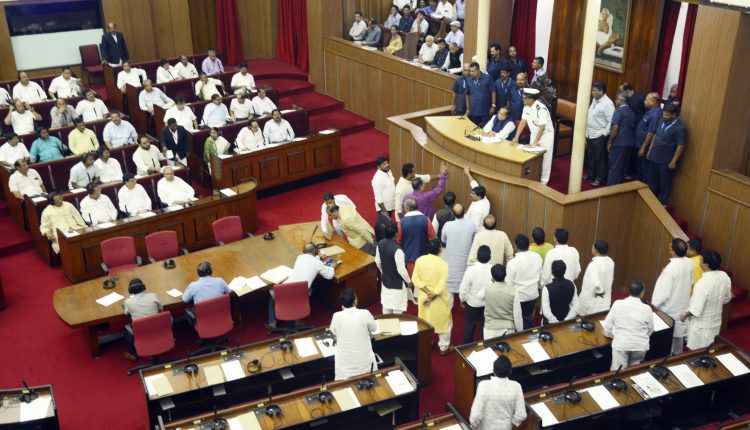 Bhubaneswar: The alleged custodial deaths in Puri and Biramitrapur in Sundargarh district triggered an uproar in the Odisha Assembly on Saturday.

Raising the issue during Zero Hour, BJP member and leader of the Opposition Pradipta Naik alleged that police had lynched a youth, K Ramesh, on the direction of Puri SP.

Naik further claimed that instead of handing over Ramesh’s body to his family members, police had clandestinely cremated it at Swarg Dwar in Puri.

Demanding a ruling from the Speaker on the matter, the BJP leader questioned how long will the state government protect top bureaucrats involved in such heinous crimes.

Mishra said merely transferring the SP was not a punishment and he should be arrested immediately.

Claiming that the law and order situation in Odisha has gone haywire, Mishra said that police have resorted to brutal torture of accused in gross violation of the human rights for which the National Human Rights Commission (NHRC) has issued strictures to the government.  “It seems that the Odisha government is following the modus operandi of the Uttar Pradesh government,” he added.

Replying to the concern of the Opposition members, BJD member Amar Satpathy said such sensitive issues have to be taken seriously.

He said that the issues raised by the Opposition should not be discussed in the House through a motion as the matter is sub judice.

A Woman Gives Birth On Hospital Verandah, Another In Auto-Rickshaw In Odisha’s Bargarh; Know Why

Govt Nod For Mukteswar, Rajarani Festivals With Restrictions In Odisha