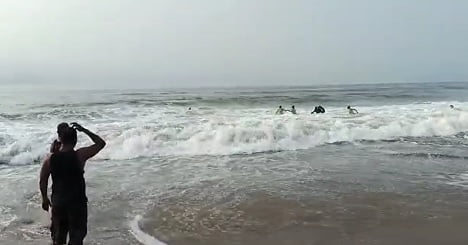 Puri: A youth went missing while his friend was rescued while they were taking bath in sea in Odisha’s Puri town on Monday.

According to sources, five friends had come on a visit to the pilgrim town and were staying in a hotel on seashore at Digabarini in Puri. While two of them were taking rest in the hotel, three others went to the sea beach.

After moving around for some time, two friends went inside the sea for a bath. Meanwhile, a strong current pulled them inside deep waters. As the third friend shouted for help, life guards on the beach went to rescue of drowning youths. They rescued one youth and brought him safely to the shore, but failed to trace his friend.

The missing person has been identified as Rabi Singh of West Bengal and the rescued youth as Sagar Kumar Choudhury of Bihar.

On being informed, police arrived at the spot and registered a case. They have contacted Rabi’s parents to know his details, the sources said.