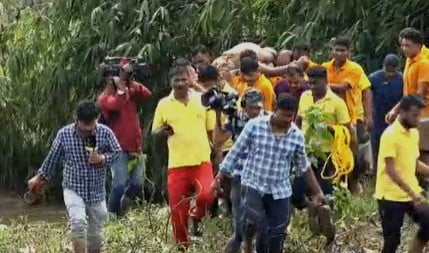 The incident took place around 3 pm on Sunday.

The deceased, a resident of Dhipa Sahi in Baramunda village, started for tuition at Soubhagya Nagar around 2 pm. Although his mother had told him not to attend the tuition, he promised to return soon after completing the project work.

While Raja was on the way on his bicycle, he probably could not distinguish the mount drain in Lane-7 at Satabdi Nagar as the rainwater was overflowing on the road. As a result, he fell into the drain no-8 and was swept away.

Some youths found the boy being swept away by the drain water and immediately jumped into the drain to rescue him. When they failed to rescue him, they informed the fire brigade.

A team of Khandarigi police and the Fire Brigade of Baramunda rushed to the spot and begun a search operation. Despite a night-long search, they could not trace the boy.

Finally, the body was found inside bamboo shrubs near the drain at Panchasakha Nagar this morning. It is about 10 km from where the incident had taken place.

A fire service personnel told the media that the body of the deceased has multiple injuries. While blood was oozing from the nose, the body had swollen after remaining in the water for more than 18 hours.

Another Deep Depression In Bay To Reach Odisha Coast By Next Weekend; Know Rain Forecast