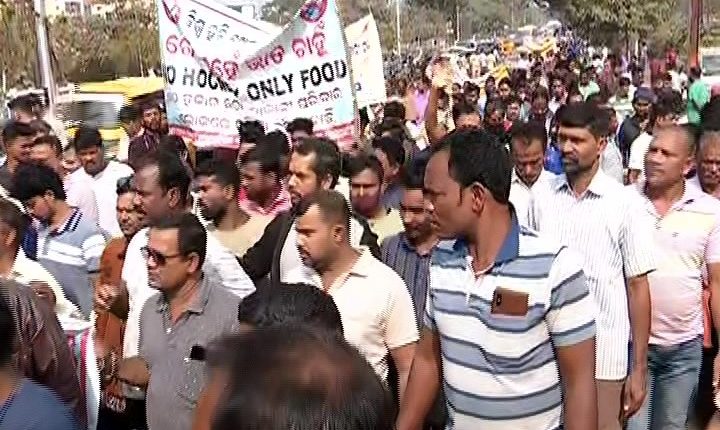 Bhubaneswar: The Bhubaneswar Municipal Corporation (BMC) decided to stop the ongoing eviction drive after hundreds of vendors, whose shops were demolished in Odisha capital, hit the streets on Friday.

The BMC was carrying out the eviction drive for the city’s beautification ahead of Men’s Hockey World Cup slated for next month.

The affected traders mobbed the office of north BMC and a scuffle broke out with the cops when the latter tried to prevent them from entering the premises. The National Hawkers’ Federation and All Odisha Road Side Vendors Association took out a rally from Damana Square, alleging that BMC did not rehabilitate them before demolishing their shops.

The rally resulted in a severe traffic jam on the Nalco Chhak-Patia stretch of the road.

A discussion was held between the BMC officials and a delegation of the association at the office, following which the civic body decided to put the eviction drive on hold.

“Their demands will be placed before the BMC commissioner. Steps will be taken for their rehabilitation, as per the policy of the government. Eviction will be stopped for some days. The commissioner will take the decision regarding compensation,” BMC north zone assistant commissioner Suresh Lenka told the media.

Meanwhile, the president of All Odisha Roadside Vendors’ Association Pratap Sahoo said that a memorandum having a seven-point charter of demands was submitted and BMC officials also agreed to some of them. The affected vendors will be rehabilitated under the MUKTA scheme.

Sahoo added that they would resume the agitation if the demands are not met within seven days.