In the election to the post held at Kigali, Rwanda, Aparajita bagged 12 out of 18 votes. With her election, the MP will represent India in the 15-member executive committee of the IPU.

Lok Sabha Speaker Om Birla has congratulated the MP on her election. Congratulations Aparajita Sarangi, MP, for having won the election to post of Member of Executive Committee of IPU during IPU145 at Kigali, Rwanda with a spectacular margin of 12 out of 18 votes. Wish you a successful term as a member of the prestigious body,” he said in a tweet. 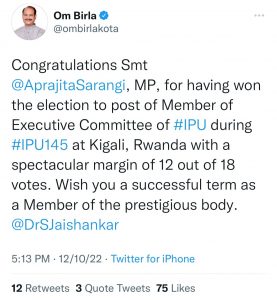 The MP thanked Prime Minister Narendra Modi for nominating her to the prestigious post. Stating that it is a victory for India, she said it was a matter of pride for the people of Odisha.

Out of 190 parliaments in the world, IPU has membership of 178 parliaments. Set up in 1887, the IPU facilitates parliamentary diplomacy and empowers parliaments and parliamentarians to promote peace, democracy and sustainable development around the world.