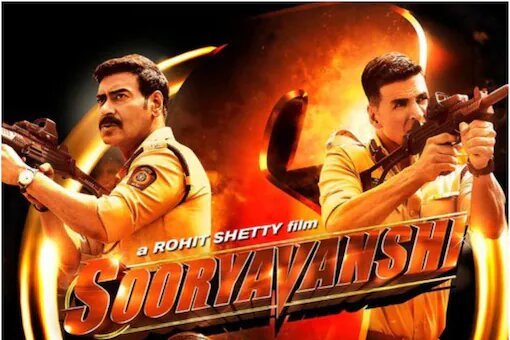 New Delhi: Although it opened to mixed reviews from critics, director Rohit Shetty’s ‘Sooryavanshi’, starring Akshay Kumar and Katrina Kaif, earned a remarkable Rs 26 crore in its debut on Friday, the highest Bollywood opening since the COVID-19 outbreak began on Diwali.

“The early territory numbers (of Sooryavanshi) are coming in very similar to ‘Golmaal Again’ but it’s likely that Mumbai will lag due to Maharashtra being at 50% occupancy,” a Boxofficeindia.com reported stated.

This takes Sooryavanshi to the list of Akshay Kumar’s highest opening day grosser, where, ‘Mission Mangal’ is at the top. Exceeding all expectations, the film collected Rs 29.16 crore on its opening day. Sooryavanshi is now second on the list. Earlier, ‘Gold’ held the record. It collected Rs 25.25 crore on its opening day. Akshay Kumar’s ‘Kesari’, released during Holi in 2019, is in the fourth position with a collection of Rs 21.25 crore.

Sooryavanshi released globally on 1300 screens in 66 countries while in India the exact numbers are yet to be shared by the makers. The other major films that are slated for theatrical release include Salman Khan-starrer ‘Antim’, John Abraham-starrer ‘Satyameva Jayate 2’ and Saif Ali Khan-Rani Mukerji-Sidhant Chaturvedi and Sharvari-starrer ‘Bunty Aur Babli 2’.