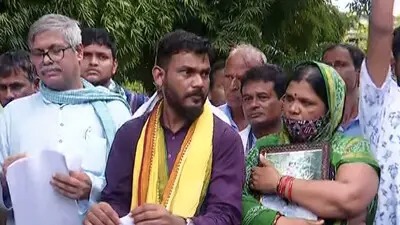 Bhubaneswar: Schools are likely to remain closed on Tuesday with the student wing of Naba Nirman Krushak Sanghathan (NNKS) calling for a peaceful Odisha bandh over police inaction following the death of a Plus III first-year student of Buxi Jagabandhu Bidyadhar Autonomous College (BJB) in Bhubaneswar.

The 19-year-old died by suicide on July 2 in the Karubaki Ladies Hostel of the college after allegedly being ragged by seniors.

Meanwhile, Congress, several business establishments and social outfits have extended their support to the 12-hour bandh, which will begin at 6 am. While some schools in Bhubaneswar have declared a holiday on account of the bandh, vehicles are expected to remain off the road due to the protests, which is also likely to affect train traffic. The organisation has also urged businessmen to down their shutters, sources said.

In view of the band, the Home Department has issued an advisory directing its employees to reach Lok Seva Bhawan, Kharavela Bhawan, Rajiv Bhawan and Heads of Department Building latest by 9.30 am. “It is apprehended that they may stop vehicular traffic, rail traffic and close down business establishments and picket before Government Offices, Banks and Educational Institutions etc,” the advisory stated.

The front gates of the Lok Seva Bhawan will be closed at 10.15 am, and all passage will be regulated through the rear gate.

A total of 12 platoons of police force have been deployed at multiple locations in the capital to thwart any untoward incident. Major areas like Vani Vihar, Rasulgarh, Palasuni, Khandagiri and Baramunda have been placed under tight security.

“It is unfortunate that the government has failed to ensure justice to the victim even after so many days of her death. There will be non-violent protests and we are urging everyone to come forward and extend their support it,” asserted General Secretary of the outfit Manwar Ali.

Earlier, Farmer leader Akhaya Kumar had called upon people of the state to make the ‘Odisha Bandh’ successful. “Naba Nirman Samiti and Naba Nirman Krushak Sanghathan have urged political outfits and every responsible citizen of Odisha to come forward and raise their voice against the state government’s failure to give justice to the victim,” he said.

“Police have ruled out ragging as the cause of the girl’s suicide, despite the fact that she indicated it in her suicide note. Police violently pulled up the deceased’s mother when she was seated on a dharna. On moral grounds, the hostel warden and supervisor should quit,” he added.

A peaceful protest was held in front of the DGP’s office in Cuttack on July 17 demanding action against those responsible for the girl’s suicide, while student wing members and the victim’s mother Bidyut Prava Mohanty visited various colleges in Bhubaneswar on July 14 and July 15 and educational institutions in Cuttack on July 16 to seek the support of the students to ensure justice for Ruchika. “I would like to urge every citizen of Odisha with folded hands to come forward and join the Odisha Bandh on July 19 so that my daughter will get justice,” the bereaved mother said.

She had earlier staged an agitation in the state capital, first in front of the college gate and later at lower PMG square, demanding the transfer of the case to the CBI.