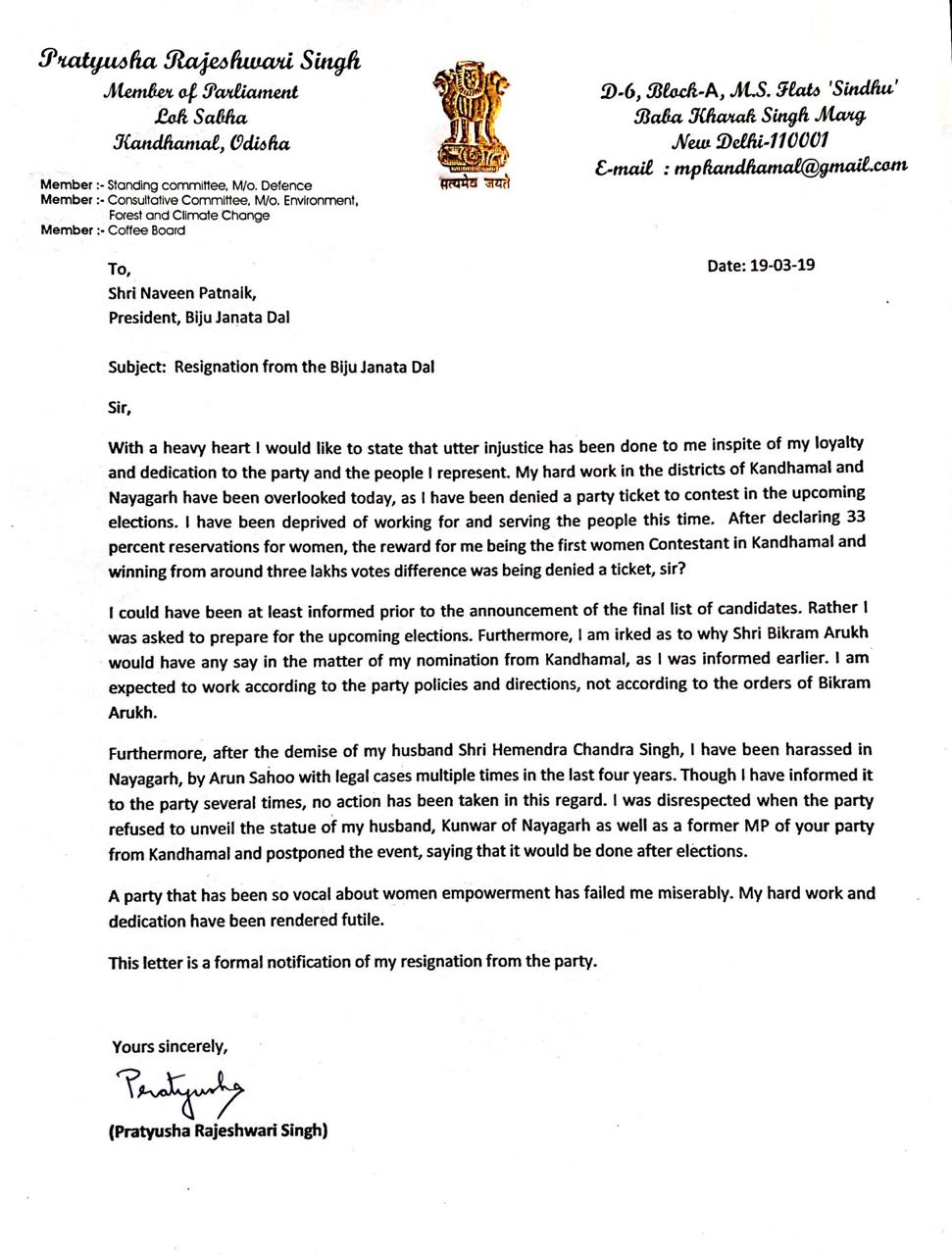 Bhubaneswar: Kandhamal BJD MP Pratyusha Rajeswari and another party MLA from Daspalla, Purna Chandra Nayak, resigned from the primary membership of the BJD on Wednesday.

In her resignation letter, Pratyusha said she was being harassed by the BJD’s Bhanjanagar MLA, Bikram Keshari Arukh. “Utter injustice has been done to me in spite of my loyalty and dedication to the party and the people I represent,” Pratyusha wrote. “My hard work in the districts of Kandhamal and Nayagarh have been overlooked today… I have been deprived of working for and serving the people this time. After declaring 33 per cent reservation for women, the reward for me being the first woman contestant in Kandhamal and winning from around three lakhs votes difference was being denied a ticket.”

She also said that prior to the announcement of the final list of candidates, the party should have informed her about its decision to not field her as a candidate. “Rather, I was asked to prepare for the upcoming elections. Furthermore, I am irked as to why Bikram Arukh should have any say in the matter of my nomination from Kandhamal. I am expected to work according to the party’s policies and directions, not according to the orders of Bikram Arukh,” she said.

She went on to say that a party that has been so vocal about women’s empowerment has failed her miserably. “My hard work and dedication have been rendered futile,” she noted.

Talking to mediapersons, she said she had been harassed by Nayagarh BJD MLA Arun Kumar Sahu after the death of her husband, Hemendra Singh.

There was speculation that Pratyusha could join the Congress, as parleys with the BJP were not making much headway.

“I was denied a ticket because of a wrong decision taken by a group of party leaders,” Nayak said. “Going by the manner of distribution of tickets, it is now clear that the party is keen on giving an opportunity to corrupt candidates.”

Talking about the BJD giving Ramesh Behera the ticket to contest from Daspalla, Nayak said Ramesh had misappropriated Rs 7.32 crore, which was earmarked for the development of SC and ST communities. “I will never lend my support to a person of such integrity,” Nayak said.