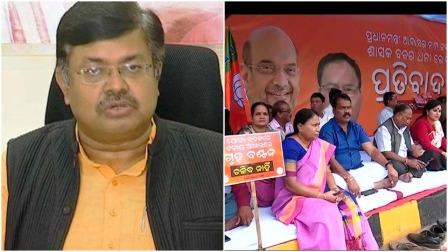 Bhubaneswar: BJP accused the Odisha government of hijacking a Central scheme and sat on a dharna near Raj Bhawan in Bhubaneswar on Thursday.

BJP state general secretary Prithviraj Harichandan said the Centre had sanctioned money for the construction of four lakh houses under Pradhan Mantri Awas Yojana in 2018. But the state government has allotted the work order through tender by replacing the logo of the Central scheme with the Chief Minister’s photo and the photo of the Biju Pucca Ghar Yojana under its Mo Awas Yojana, he alleged.

“Besides, the state government didn’t mention that it was a Central scheme while carrying out the survey for the allotment of these houses. Plus, there is no geo-tagging of the houses for the beneficiaries whose names have figured in the preliminary list. This is gross violation of the rules,” the BJP leader told the media.

“The most unfortunate thing is that local BJD leaders and MLAs with the help of Panchayat Executive Officers and Gram Rojgar Sevak (GRS) staff are now busy in geo-tagging the houses of their party workers and supporters. The BJD MLAs are collecting Rs 21,000 as percentage from each beneficiary,” he added.

Harichandan further claimed that the state government has also hijacked other Central schemes and implementing them under its name. “We will submit a memorandum to the Governor and urge his  urgent intervention in the matter,” he said.

Draupadi Murmu Replaced By Bais As Jharkhand Guv; Know About…