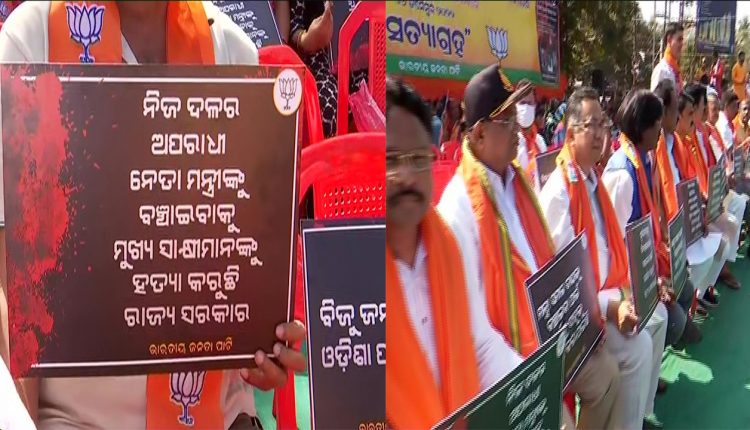 Bhubaneswar: BJP launched a statewide ‘Satyagraha’ in Odisha on Monday alleging misgovernance, spurt in crimes against women, rising criminalisation of politics and worsening law and order situation during the BJD rule in the state.

In Bhubaneswar, a large number of BJP leaders and workers gathered near the state party headquarters and held a sit-in as part of the protest programme against the state government. Similar protests were held in different parts of the state duringthe ‘Satyagraha.’

BJP’s ‘Satyagraha’ coincided with the grand silver jubilee celebration of the ruling BJD organised in Puri marking the foundation day of the party.

Alleging involvement of ruling BJD leaders including Ministers in murder, sexual assault and other crimes, the protesters accused the state government of having failed to maintain law and order.

Senior party leaders including BJP state unit president Samir Mohanty claimed that the state witnessed rising incidents of atrocities against women and criminalisation of politics by the ruling BJD.

Alleging that Oidisha has become a save heaven for the criminals and anti-social elements during the last 23 years of the BJD rule, they said the people of Odisha are peace-loving and proud of Jagannath culture.

However, involvement of BJD leaders, including Ministers, in  murder, sexual assault and anti-woman activities have been alleged in the last 23 years, Mohanty claimed.

Coming down heavily on the BJD government, he alleged that spurt in crimes, particularly against women, seems to be the only achievement of the regional party.

Stating that former Minister Dibya Shankar Mishra’s role in Mamita Meher murder case was under suspicion, he said the death of Gobinda Sahu, prime accused in the case, in Kantabanji jail in Balangir district has raised many questions as it happened just before his scheduled appearance before a local court.

Hitting out at the BJD government over the Mahanga double murder case, the BJP leader claimed that the role of former Minister Pratap Jena was under suspicion. Surprisingly, the prime accused in the case was mowed down by a truck, BJP leaders said.

4 Youths Arrested For Hurling Bombs At Showroom In Bhubaneswar

Shraddha Walker’s Death Forced Me To Break Up With Tunisha: Sheezan