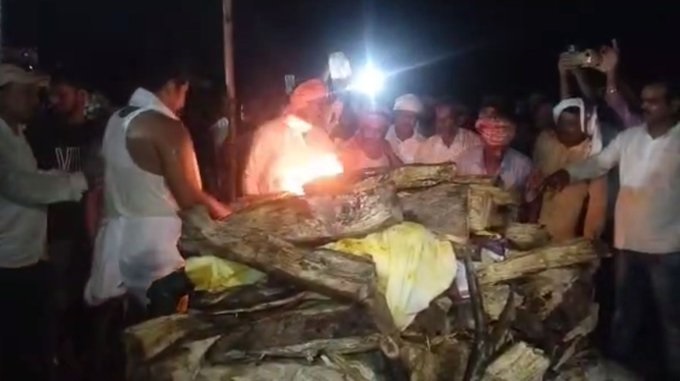 Sethi’s son Suraj Suryavanshi lit the pyre as family members and a large number of supporters bade a tearful farewell to the departed leader.

Sethi breathed his last at the All India Institute of Medical Sciences (AIIMS)-Bhubaneswar, where he was undergoing treatment. The legislator was in the ICU of the hospital for the last one month.

He was Deputy Leader of the Opposition in Odisha Assembly and vice-president of the state BJP unit. Born in 1961 in Mangarajpur, Sethi was also a poet and writer.

Offering his condolences, firebrand Congress MLA Suresh Routray on Monday said political parties like the BJP, Congress and BJD may exist forever, but Odisha will never get a legislator like Sethi, who he said was liked by all for his simplicity.

President Droupadi Murmu and Prime Minister Narendra Modi were among a host of top leaders to mourn the death of the legislator.

“Saddened by the demise of Shri Bishnu Charan Sethi, a prominent public figure in Odisha. A prolific writer, Shri Sethi was an eminent legislator. His demise leaves a void which is difficult to fill. My heartfelt condolences to his family, well-wishers and followers,” Murmu tweeted.

Expressing grief and offering his condolences, Modi tweeted, “Shri Bishnu Charan Sethi Ji made an outstanding contribution to Odisha’s progress. He distinguished himself as a hardworking legislator and contributed greatly to social empowerment. Saddened by his demise. Condolences to his family and supporters. Om Shanti.”

Heavy Rain In Odisha: 2 More Gates Of Hirakud Opened; Is There A Possibility Of Flood?