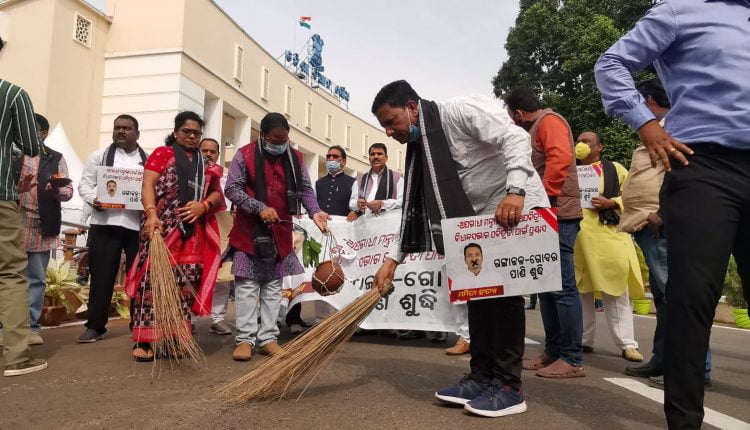 Bhubaneswar: The Odisha Assembly had to be adjourned twice (from 10.30 am till 11.30 am and then till 4 pm) on Friday as the BJP and Congress MLAs remained firm on their demand for Minister of State for Home Dibya Shankar Mishra’s ouster from Council of Ministers for alleged links with Govind Sahu, prime accused in the sensational Mamita Meher murder.

Some BJP legislators were seen sprinkling Gangajal and cow-dung water on the premises, claiming that the entry of the minister had desecrated the state Assembly.

“The House had become impious due to the presence of the minister during the proceedings in the last two days,” said Opposition whip Mohan Majhi.

He further said that the BJP has demanded two things in the House- removal of the minister from the Cabinet and CBI probe to ensure a fair investigation into the Mamita Meher murder case. “But when we raised the issues during the Question Hour, Speaker adjourned the House proceedings. Besides, CM Naveen is shielding Mishra. We will continue our agitation until our demands are met,” he added.

Notably, former district Judge ABS Naidu was nominated by Orissa High Court to monitor the investigation in the case following a request by the state government, a day before the winter session of the assembly began.

While the move was seen as an attempt by the government to quell the opposition demand for the resignation of the minister, the session began a rocky note with Congress MLA staging dharna at the entry gates to prevent Mishra from entering the House.

Shouting slogans and holding placards that read “Go back MoS (Home)” and “Give Justice to Mamita Meher”, the legislators demanded an answer from Chief Minister Naveen Patnaik on the issue.

Congress MLA Taraprasad Bahinipati said that they will continue with the stir till the minister is removed from the Council of Ministers and arrested. “Congress condemns the attempt of the BJD to suppress the matter in the House,” he added.