BJP Stages Demonstration Before BMC Over Garbage Problem In Bhubaneswar 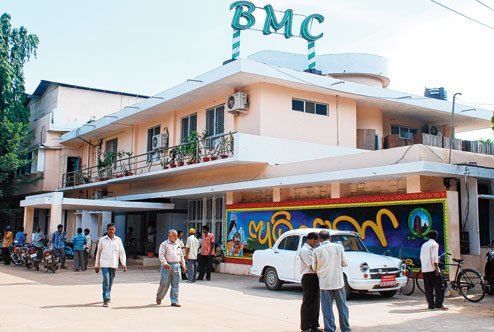 Bhubaneswar: With garbage dumps piling up across Bhubaneswar as sanitation workers of Bhubaneswar Municipal Corporation (BMC) were not lifting those, the BJP staged a demonstration in front of BMC office on Friday.

The leaders and workers of Bhubaneswar unit of BJP took out a protest march to BMC office in the city and staged the demonstration demanding immediate solution to the problem.

Speaking to media persons at the BMC office, Bhubaneswar BJP president Babu Singh said due to negligence of the municipality officials, the residential colonies in the city have turned into garbage dumping yards.

Holding the BMC officials responsible for the garbage crisis, another BJP leader Dillip Mohanty said, “After the tenure of old contractors engaged in cleaning operation expired, new contractors have been appointed. But, the new contractors are yet to start the work as the deal for distribution of money (bribe) among the officials has not been completed.”

The BJP leaders threatened that they will take to streets if problem the is not solved within 48 hours.

According to sources, villagers of Daruthenga on the outskirts of Bhubaneswar, which is used by the BMC as dumping yard, are not allowing the vehicles carrying the solid waste for the last 14 days, leading to the crisis. They have been demanding bio-compost processing unit in the village instead of dumping of the garbage.

Meanwhile, Bhubaneswar mayor Sulochana Das said the BMC was negotiating with the villagers through talks and s solution would be found soon. “We are planning to dispose of the garbage in the same place by converting it to compost through the micro composting centres,” she added.