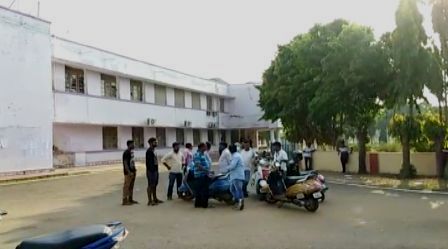 Keonjhar: BJP workers detained a youth moving suspiciously near an EVM strongroom on the premises of Odisha School of Mining Engineering late on Friday night and handed him over to the police.

Reports said that three youths arrived on the premises in a vehicle late at night. Some BJP workers who noticed it barged into the premises and caught one of the youths. When confronted, the youth identified himself as a software engineer. The party workers later handed him over to the police. The two other youths, however, managed to escape.

Local BJP leader Biraja Mishra told mediapersons that the BJD had tried to tamper with the EVMs in the strongroom. “We will take up with the CEO and the returning officer how security personnel deployed on the school premises had allowed these youths to go in,” Mishra said.

CEO Recommends Repolling In Another 10 Booths In Odisha