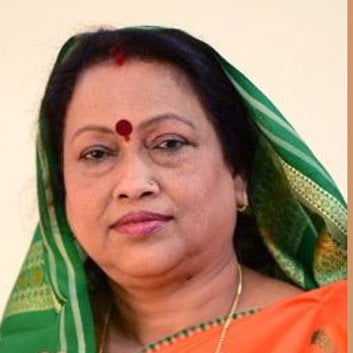 Bargarh: Making a startling claim ahead of Padampur Assembly bypoll in Odisha, senior BJP leader Radharani Panda has alleged that some party people had turned ‘saboteurs’ and worked for her defeat in Brajarajnagar by-election held earlier this year.

Without naming any one, the former MLA said the whole state including the party is very much aware that some leaders had sabotaged her prospects in Brajarajnagar.

Panda, who represented Brajarajnagar in the state Assembly from 2014 to 2019, claimed that some people worked to ensure her defeat in the bypoll as they feared that she would be fielded by the party in the 2024 general elections.

The former legislator, who was in Bargarh district to campaign for BJP candidate Pradip Purohit for December 5 Padampur Assembly by-election, said she has all along been with the people and will continue to work for them despite her defeat in the bypoll.

BJD’s Alaka Mohanty had won the by-election in Brajarajnagar defeating her nearest Congress nominee Kishore Chandra Patal, while Radharani Panda was pushed to the third place.

Confident of Purohit’s victory in Padampur, she said people of the constituency consider the BJP candidate as a fighter who has been raising local issues including farmers’ problems.

MPOX: Monkeypox Set To Be Renamed To Destigmatise Virus