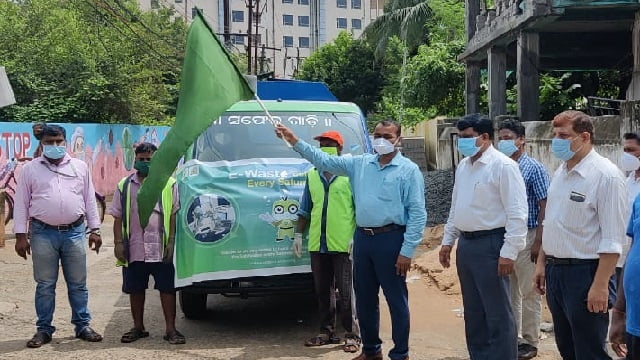 Bhubaneswar: The Bhubaneswar Municipal Corporation (BMC) on Saturday launched the drive to collect e-waste from households in select areas of the city.

Launching the drive, teams of BMC and Swachha Sathis of the area moved door to door to collect the e-waste in Gajapati Nagar of ward number 12 under north zone. They also promoted awareness among people on not carelessly disposing of the electronic items and giving those to Safai Karmacharis in order to save the environment of the city from pollution.

The people gave away their unusable cords, switchboards, computer keypads, parts of mobile phones and remotes to the Safai Karmacharis who took those in the dedicated vehicle.

Later, the teams carried on the drive in ward 29 under the south-east zone and ward 48 under south-west zone.

Laxmikanta Sethi, additional commissioner, BMC said the municipal body has started the drive as the damaged electronic items are not only harmful to the environment but also human health. The drive will be extended to other wards soon.

The damaged electronic items collected from the households would be handed over to e-waste collectors of the city on recommendation of the Pollution Control Board, said Suvendu Kumar Sahoo, Deputy Commissioner, Health and Sanitation.

Priest Arrested For ‘Hate Speech’ Against PM Modi, Amit Shah And Others