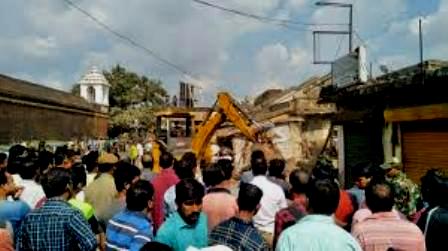 Bhubaneswar: The enforcement squad of the Bhubaneswar Municipal Corporation (BMC) continued the eviction drive around the periphery of Lingaraj temple in the Old Town area on Friday.

According to reports, the squad demolished the Tarini and Mahadev shrines on the southern side of the Lingaraj temple. The two temples could not be demolished yesterday due to a protest by locals.

Besides, some privates houses inside the temple security zone were also demolished in the presence of police and a local magistrate. The house owners had been encroaching on the government land for the last 30 years.

BMC officials said temporary shops at the daily market near the temple will also be demolished.