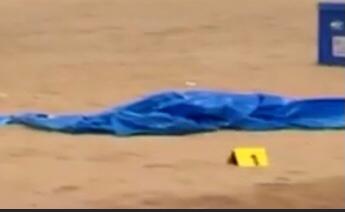 Bhubaneswar: The body, found on Kuakhai River bank on the outskirts of Bhubaneswar on Wednesday night, was buried three to four days back, police said on Thursday.

The preliminary investigation revealed that it was the body of a male person. But the identity of the deceased or his age has not been ascertained as it was found in a highly decomposed condition.

Bhubaneswar DCP Umashankar Dash, who visited the spot along with a scientific team, said, “We got a call at around 7 pm on Wednesday that a body was partially buried at the Bali Jatra ground under Mancheswar police limits. A police team went to the spot, cordoned off the area and kept guard the entire night.”

The body was brought out from the sand in presence of a magistrate. Considering the condition of the body, it can be assumed that it was buried three to four days back, but it will take time to identify the victim, Dash said.

He further said 3-D scanning of the crime scene has been conducted and the body sent for post-mortem. Police were enquiring in the nearby areas to identify the deceased.

However, he said they will go through the missing person reports filed in different police stations. After the post-mortem, the photos of the deceased, his dress and footwear of the deceased will be circulated for identification, he added.