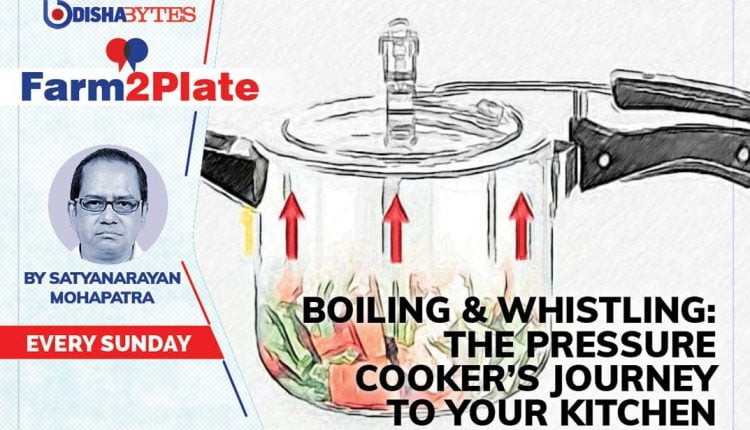 In our daily lives, “pressure cooker meals” have meant survival for families. Especially during the COVID pandemic, this humble kitchen appliance has given us the quick hot khichdi or a single pot meal.

This apparatus is found in every kitchen these days. But not many know that the pressure cooker dates back to more than a couple of centuries.

The “steam digester” was the world’s first pressure cooker, which was designed by French physicist Denis Papin in 1679. This gadget was an airtight contraption which raised the boiling temperature above 100°C.

The gadget had a tube attached with a flap, and a weighted rod that allowed the steam to escape when the pressure was high. It was also called the “bone digester” because it softened the bones in meat.

It earned great reviews and was presented before the Royal Society of London. However, it didn’t get much popular because it was very cumbersome to use and expensive as well. Papin died in obscurity and failed to see his invention becoming a popular kitchen gadget today.

Based on this principle of pressure cooking, another Frenchman Nicolas Appert used the technology for canned food. The food had a longer shelf life if cooked under pressured conditions.

Georg Gutbrod, a German, started manufacturing these tinned pressure cookers in Stuttgart stores. But the acceptance among the people for the kitchen appliances was low.

In 1919, Jose Alix Martinez, a Spaniard, started manufacturing pressure cookers named as Olla Expres. It was based on the same technology as that of Papin.

By 1930 it became very popular especially among mountaineers as lower boiling point meant longer cooking time and pressure cooker helped ease the problem.  This became a popular household device in 1938 when Alfred Vischer designed the Flexi-seal speed cooker. This became popular in the US and Europe among the women folks as cooking got easier and faster too.

In India, Indumadhav Mallick, a tech nerd, paved the way for pressure cooking. In 1910, he invented the steam cooker or ICMIC cooker. It was a special kind of cooking equipment where rice, pulses, fish, meat and vegetables could be cooked in steam, with faster timing.

The compact arrangement and portability made it popular among bachelors and during trips where a kitchen was not available.

The contraption had separate containers that were stacked on top of each other and placed inside a container with a stove at the bottom. Water was filled in the outer case and sealed which allowed the food to be cooked with the generated steam. ICMIC did not use the pressure cooking process, but it used the steam to cook the ingredients thus resulting in a complete meal. It helped as it could cook rice-based meals – rice dal and curries.

In eastern India, it was known as ICMIC, Santosh Cooker in the western part and Rukmani cooker in the south. This cooker sort of revolutionised the kitchens in the country and paved the way for the pressure cooker.

The year 1959 marked the arrival of pressure cooker in India. Prior to this, all major pressure cooker companies were tasked with making canned food for the troops. Some small companies did try to make these cookers, but had tech issues. They exploded due to substandard materials and the valve also posed a major issue.

By then, the western world was getting exposed to combi-stoves and ready to eat meals. But pressure cooking was a boon for the Asians and Indians in particular. Both Hawkins and TT Pvt. Ltd (TTK Prestige) were the forerunners in providing the Indians with magic appliances — pressure cookers to cook lentils, rice, meats and tough vegetables specially the potatoes which could be cooked in a whistle or two.

Both the brands had their own share of gory incidents of explosion and food burnouts. In the ‘70s, both the brands went for innovations with gasket, valves and vents. Most importantly they provided the user manual along with recipes.

Since the ‘80s, it has been a de facto kitchen appliance in most households. Pressure cookers then became easy to operate with savings on cooking gas; ease of cooking and the long hours in the kitchen was a respite. For example when cooking dal on an average took 45 minutes to cook, the cooker reduced the time to 15-20 minutes. This math calculation was simple which worked heavenly for mothers, working ladies and the cooking maids too.

Pressure cookers now come in various shapes and sizes. But they still come with the famous piercing whistle sound track from the dancing valve.

Celebrity Chefs have also become brand ambassadors; with the purchaser of the cooker getting access to their “One Pot One Shot” recipes.

The cooker was most helpful during the lockdown, from cooking one’s favourite mutton curry, to boiled veggies, dals, pudding and stews. It taught us the right doneness of rice and also the layering technique to cook the perfect biryani.

Odisha Bracing Up For Multiple Cyclonic Circulations Over Bay Of Bengal