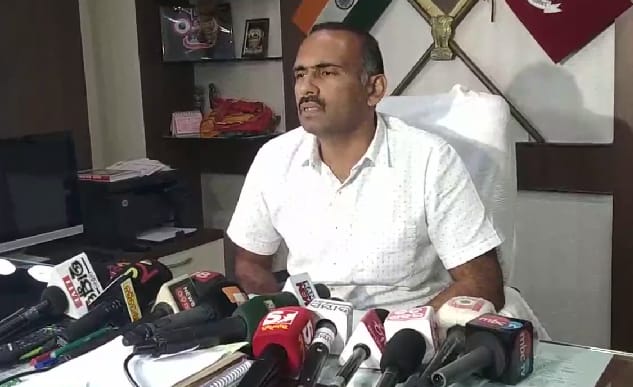 Puri: A day after the bombings at Brahmagiri area near the Puri town, SP Kanwar Vishal Singh said stern action has been taken against the persons involved in the attack.

A series of bombings had rocked Nathapur village under Brahmagiri and several houses of the displaced people were also torched following a land dispute.

Speaking to media persons the SP said police focus is on maintaining law and order in the area. “As this a dispute between two groups, we are trying to strike a long-term deal between them to end the chaos,” he said. Five platoons police force has been deployed in the village and 10 persons have been injured, said the SP.

Collector Samarth Verma said the ADM had rushed to the spot to hold discussions with the locals. “Though the situation is under control now, we still have put the area under strict watch,” he said.

Verma said in March, more than 40 Harijans from Brahmapur village under Krushnaprasad tehsil were evicted from their villages following which they came to Nathpur. At Nathpur, they started constructing houses on a patch of government land which was protested by a section of 35 Mouza residents.

A dispute had erupted and following the intervention of tehsildar, a contract was signed between the people of 35 Mouza and Satpada in the presence at Satpada outpost. They were told to stay there temporarily due to corona pandemic. They also agreed to the deal.

However, on Sunday, around 500 people of 35 Mouza met at a temple and resolved to evict the Harijans from the areas, said a victim. “They started bombing our homes, we decided to flee this area,”the victim added.

Meanwhile, the scene in Nathpur tells the tale of what has transpired the previous day. Many crude-unexploded bombs are still lying on the village road.

Around 20 houses were gutted and several left homeless. The district administration provided dry food to the affected people, said Verma.

Special Train Between Kharagpur & Jajpur Keonjhar Road From This Date