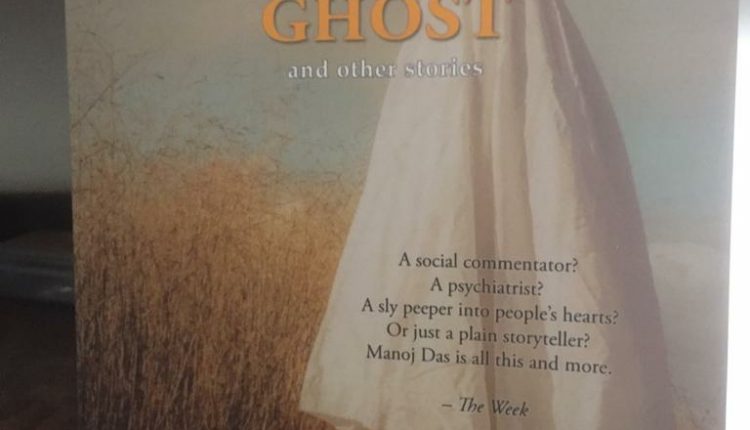 The past is never dead. It’s not even past.

William Faulkner, Requiem for a Nun

Manoj Das is not the first writer to obsess over the past. There is something about the past which attracts all of us. Having lost a child in his youth and never being able to free himself from the memories associated may have had something to do with this yearning for the past. This probably is the reason why most of Das’s writings tend to romanticize a lost world.

The move, however, may not be innocent of political coloration. A careful reader is bound to notice how each and every story of Das, by its sheer charm, draws her/ him into the lost days and tries for the restitution of the values and norms of a culture which has now been subverted by colonialism. The volume of 11 short stories titled Farewell to a Ghost does not, however, set itself the limited goal of anti-colonial critique. On the contrary, it aims to reach out to the entire world to explain about an alternative reality, a different way of life that has not got its due recognition yet.

The stories included in this volume are each a specimen of Odia life presented from the perspective of an insider. It presents a world where the human, the natural and the supernatural  live together rather than in segregation, sharing mutual respect and compassion for each other. It is a world which has to be seen feelingly. In the title story, “Good-bye, Darling Ghost”, the ghost is not just an object of fear; rather she is a protector, an object of compassion and someone’s love interest, all rolled in one. In the story, “The Crocodile Lady”, the crocodile is not a fierce predator; it is a caring husband who is ready to risk his life to find out the whereabouts of his estranged wife. And all these have not been presented, as in a fable, for the moral upliftment of the readers. Rather these have been weaved into a narrative to present the rich animism that characterizes a traditional mindset that goes all the way back to its primitivist roots. This calls for a magic-realistic narrative technique, in the use of which Das is a past master.

Hailing from the same soil (Balasore) as one of Odisha’s greatest storytellers and satirists, Fakir Mohan Senapati, Das to a certain extent inherits Fakirmohan’s double take on indigenous values, conservative, on one hand, and critical, on the other. The subtle satire against the prejudices of the colonial Odishan society is as educating as it is amusing. For example, in “Good-bye, Darling Ghost” Das takes a dig at Odia community’s blind admiration of anything that is foreign and their easy acceptance that the English are a superior class.

“Not only was she a ghost, but she had alien blood in her. True, the whole thing about blood had become irrelevant when she died but oddly enough it was the drop of English blood which enhanced our respect for her.” (p.13)

In other instances he has used horror to highlight the follies of his own community. In the story “A Blood-red Sunset” he presents the painful consequences of the caste system and creates both horror and outrage in the minds of the readers. So by reading this collection, a reader will get an authentic picture of Odishan society with its pros and cons.

The choice of the stories for this collection also reveals Das as a subtle psychologist, who digs into the unconscious to make all our desires and demons come alive. The projection of the life of the mind as constituting the greater reality of human existence is also yet another distinctive feature of Das’s writing. The stories such as “The Shadow’ and “Fog” are fine examples where Das has given shape to these ideas. In both the stories, it is one traumatic incident that changes the course of lives of two people and their entire life post that is to be judged in relation to that one event. Thus Das subtly warns his readers against any rash judgements be it on the actions of a person or the principles that guides the lifestyle of a community.

The translators have done a commendable job to capture each thought from the original and beautifully reproduce it in the same simple and evocative style in which Das presented it in Odia language. The title story is a fine example of the meticulous care that has been taken by the translators so that not a single nuance of meaning is lost in translation. The original title in Odia “Bhutuniku Bidaya”, which literally translates as “Farewell to a Ghost”, has been modified to “Good-bye Darling Ghost” so that the readers will not miss the emotions behind the farewell which was like a deep personal loss to the villagers.

“Farewell to a Ghost” then is a microcosm of the Odishan society. It is a testament to how traditional cultures are being challenged by modernity. It is a must read for any reader who believes there’s a life beyond this physical existence.