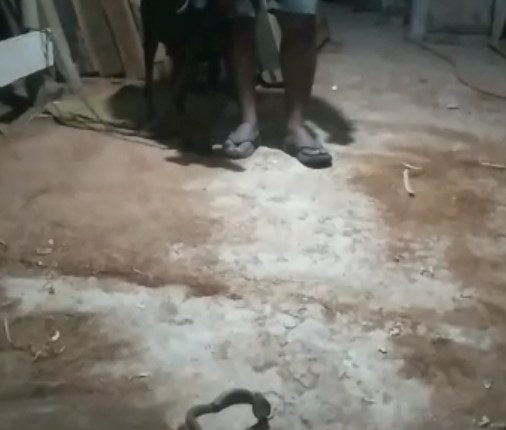 Bhubaneswar: A Doberman fought with a cobra and injured it by biting it while the snake was trying to enter a house in the city on Friday.

While the family members of Soumya Ranjan Senapati in Sundarapada village were inside the house due to cold, their pet female Doberman ‘Kali’ was guarding in the courtyard in the evening.

Kali saw a 3-ft cobra slithering its way inside the house from the courtyard and started barking and ran around it to prevent it from moving. The snake, in retaliation, opened its fang and attempted to attack Kali.

Hearing the barking of Kali, Soumya’s family rushed to the courtyard. Meanwhile, Kali held the cobra’s body in its mouth tightly, shook the head several times and threw it on the floor.

Soumya took his Doberman aside and checked whether she was bitten by the cobra. He also covered the cobra, which was injured, with a basket.

Later, on being informed by Soumya, Sake Helpline secretary Subhendu Mallik sent a member of his team, Arun Kumar Baral to the former’s house. After rescuing the cobra, Baral checked it and guessed that its backbone might have been broken. He took it for treatment.

Though Kali, who is pregnant, was behaving normally, Mallik advised Soumya to take her to a veterinarian to check her condition and confirm that she was not bitten by the cobra.