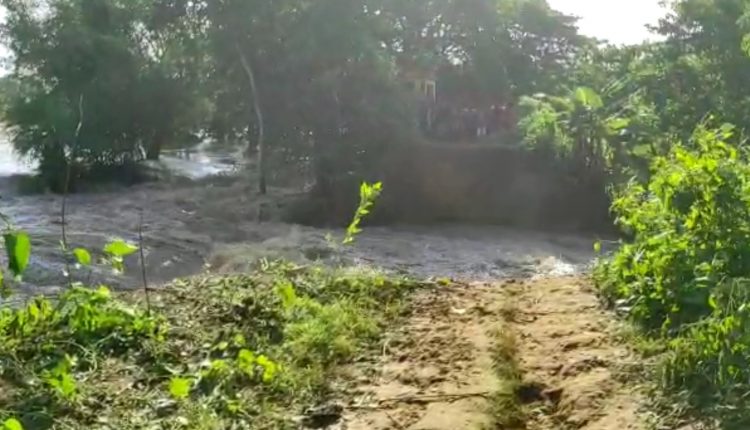 Jajpur: Floodwater entered hundreds of villages in Odisha’s Jajpur district following a breach in a branch of Baitarani river on Monday afternoon.

According to sources, heavy flow of water in Baitarani caused by continuous rainfall since Sunday night led to swelling of its branch river Kani. As gush of water exerted pressure on Kani embankments, there was a breach at Brahmacharipatna under Dasarathpur block in the afternoon.

The massive breach of more than 15 feet caused flooding in hundreds of villages under 5 panchayats. As the floodwater entered the houses, the villagers shifted to higher places with their belongings. No official of district administration had reached the place by evening.

The sources said the water level in the inundated areas was steadily increasing putting the life and properties of the villagers at stake. The villagers were facing a tough time as they have to spend the night at higher grounds.

The breach took place soon after Jajpur district collector Chakrabarti Singh Rathor along with Dasarathpur BDO and a team of officials of Water Resources department visited the embankments of Kani river on the day. The collector had instructed the officials to take steps to prevent breach in the river considering heavy inflow of water from Baitarani.

Earlier in the day, the water level of Baitarani had crossed danger mark at Akhuapada, Ballabhighat and Dasarathpur. The floodwater had entered the low-lying areas in Jajpur and Dasarathpur blocks following breach in weak points of the river embankments.