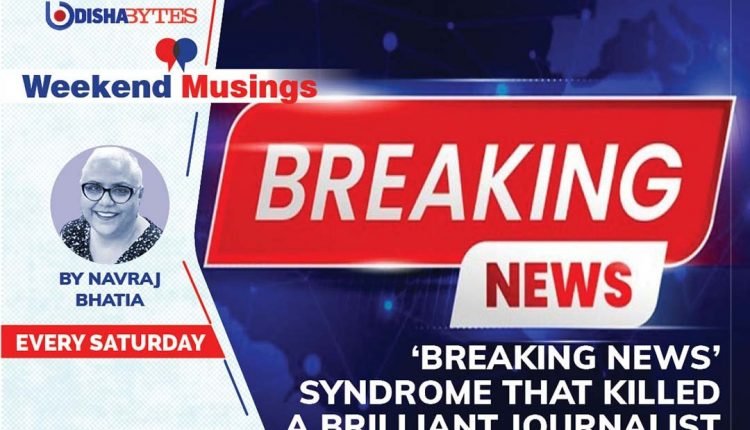 There was ‘Breaking News’ yesterday, of a young Odisha journalist dying due to drowning while ‘covering live’ the rescue operation of a tusker stuck in the Mahanadi. Ironically, Arindam Das, 39, known for giving such ‘Breaking News’, became one himself.

Apparently, such acts of bravado used to give him an adrenaline rush. An elephant stuck in a strong current certainly didn’t warrant an act of bravery on the part of a reporter because jumbos are natural swimmers and the animal would have eventually found his way out with some help from the rescue team.

What an utter waste of a perfectly brilliant life! Soldiers who get martyred fighting the enemy are lauded for giving up their life in the line of duty towards their country, living up to their oath of serving the nation. What will we call this? It is very easy to camouflage it and say, “He died doing the job he loved most.” Pure crap.

I would say the ‘Breaking News’ syndrome that has gripped the media is to blame for his death. Blinded by TRP ratings, electronic media has become immune to logic and even the quality of news reporting. In 2013, Congress leader Digvijay Singh had said, “In its race for TRP rating media is running amok.” Although he had given the statement in connection with a personal controversy, ‘running amok’ is an apt description of the way media functions.

I am no psychologist but have enough sense through personal experience and the years pumped into journalism to gauge that it is very easy to egg on and push a person who is driven by the passion to stick his head out even if it defies logic and there is risk involved. It is almost a devious method of getting things done for a profitable end.

Sadly, Indian media functions without any strict guidelines and journalists are not trained to cover special incidents, which makes them vulnerable to eventualities such as in the case of Arindam. But surely human life outweighs TRPs and a line should be drawn to the extent that journos can go while covering risk-driven incidents. In this battle to grab eyeballs (read: TRPs), the protagonist (read: journalist) should not become a victim. It is ironic that media houses knowingly put one of their own tribe in the line of sacrifice for wider viewership.

Articulating his thoughts in a leading publication last year, Dr Ahmed Raza, Assistant Professor at Maulana Azad National Urdu University had remarked, “‘Sensation above sense’ has emerged as the blueprint for media houses trying to rig viewer’s mind in order to get higher Television Rating Point (TRP) – a tool used to know about the popularity of a programme. Professionalism and media ethics have taken a back seat for the last few years as viewers themselves seem to have surrendered their preferences of news and have made peace with politically motivated and ideologically inspired news.”

When every channel is literally hollering about its ‘Breaking News’ and ‘Exclusive’ and the real issue gets lost or dissolved in the din of dramatic footage, and over the top discussions, my mind goes back to the days of newspaper reporting when readers didn’t know the face behind the written word. I belong to an era of journalists who used to ‘earn’ their exclusives by working discreetly and doing a whole lot of leg work and even then, at the end of day, it was the News Editor’s prerogative to decide whether the exclusive would carry our name or byline (journalistic lingo). No one went around the town to say “I did this.” It was a part of the job. Period.

The instructions were clear. Just report. Get quotes from people who are involved in the story. It is not your job to comment.

Even while covering lifestyle events, our articles were not shaped by PR handouts. No one could rig our thoughts.

Ethics were a given. And unlike today, we could not shoot our mouths (sorry, words off) because the copy used to go through at least two levels of scrutiny before finding its way into print.

Compared to those days, today’s reporting comes as a ‘journalistic shock.’

Let’s face it. The ‘Breaking News’ is that the exclusive media story is long dead. We have written the epitaph ourselves.