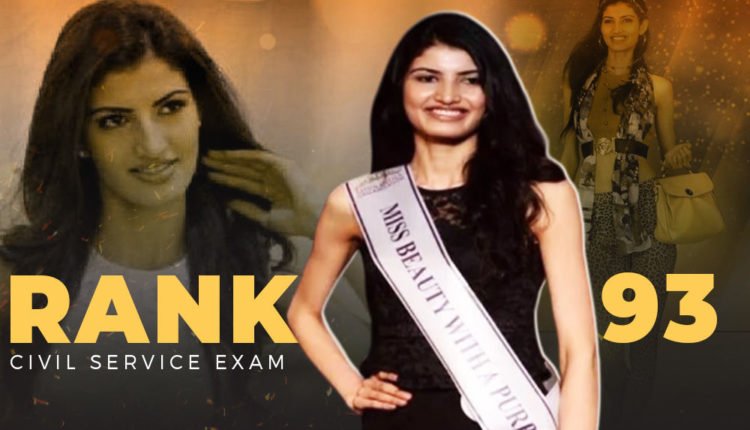 New Delhi: Breaking the career stereotype of beautiful women, 23-year-old Aishwarya Sheoran not only cracked the Civil Services examination in her maiden attempt, she secured an all India rank of 93.

She believes the image of a civil servant has changed over the years.

“Now, a civil servant (is someone) with a multi-faceted personality, who looks easily approachable, has much more acceptance among people,” she was quoted as saying by The Print.

No wonder Aishwarya is hogging the limelight and has taken the internet by storm. Here are six points you should know about her:

Aishwarya passed class X and XII Boards from Delhi. A bright student, she scored 97.5 per cent in CBSE XII exams. An alumna of Sri Ram College of Commerce, Delhi University, she had also cracked the Common Admission Test (CAT) in 2017 and got selected in IIM-Indore. However, she did not join the top institute as studying management was not part of her plans.

Being a daughter of an army man, Colonel Ajay Kumar, Commanding Officer of NCC Telangana Battalion, she always wanted to serve her country. But because her interest was in academics and scholastic pursuits, she opted to become a civil servant instead of joining the army.

Looking ahead, Aishwarya said working on women empowerment, education and health would be her priority.

Not easy for a model to prepare for competitive exams

Models belong to the glamour world and are busy projecting themselves on various platforms like social media, including Instagram, in order to be noticed and get good projects. It wasn’t easy for Aishwarya to cut herself off from that world, but because she knew what she wanted, she managed to do it.

Inspiration behind her dream to be a civil servant

As the Head Girl in Class 12, she had the opportunity to meet several civil servants who would visit her school. It was those brief meetings that helped Aishwarya make up her mind that being a civil servant was the right career choice for her.

“I come from the Jat community. I feel that somewhere the community is infamous for not providing women equal participation in decision-making. I have had a support system. My community also supported me during the Miss India contest, but this happens only with one out of 100 girls.”

And that was one of the main reasons why she wanted to join the civil services.

She didn’t take the usual coaching route for her preparations.

Aishwarya said the Internet proved to be a boon. “From books, old interviews to current affairs and newspapers, everything is easily available on the Internet. I started my basic preparations from there only. I chose only one book for a topic and revised it repeatedly. Strategy holds the key in UPSC preparation,” she said.

Aishwarya revealed that her younger brother, who plays for the Mumbai under-23 cricket team, helped her in preparing notes, while her parents guided her for the interview. She was also off Facebook and Instagram completely to avoid distraction.

In her UPSC interview, Aishwarya was asked if she believed khap panchayats are still relevant. “I said that even the Supreme Court has termed them illegal. These khap panchayats act as patriarchal hubs and often deliver anti-woman verdicts. However, if khap panchayats are to maintain their relevance, they need to use their strength in a proper way. For example, they can play a role in making the government’s ‘Beti Bachao, Beti Padhao‘ campaign successful,” she told The Print.