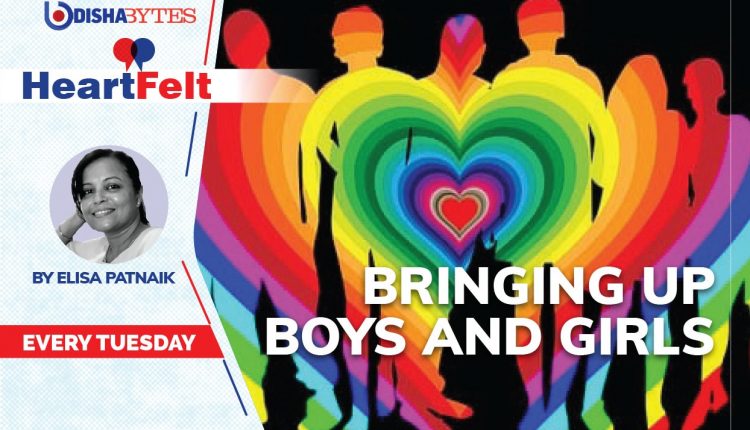 A few years back, I was attending a gender sensitisation workshop in Bhubaneswar being organised for field-level implementors of women and child development programmes. While explaining established gender norms, one of the facilitators was giving examples in the Indian context like how girls and young women are not supposed to sit with their legs up, laugh out loud and do most of the domestic work and how boys are not expected to cry and supposed to be bold and aggressive and breadwinners in a family.

As we were chatting during the coffee break, I was flabbergasted hearing what the same facilitator had to reveal. Known as a senior gender and social development expert from the state, she said smiling that some of the gender norms are indeed tough to discontinue. “Being the mother of two young girls I often tell my daughters to sit ‘properly’ and wear ‘decent’ clothes,” she said adding, “If I don’t correct them now it will be very difficult to change later.”

It set me wondering how even well-educated, socially aware people with a sense of personal agency could get influenced by deep-rooted gender norms. Some of these norms are so deeply entrenched that pulling them out from the socio-cultural structure and fabric strengthened by years of practice and social conditioning is an arduous task. Accepting and following them seem way easier.

Gender norms or gender behavioural norms are the common practices in a particular context and setting. These are shared expectations or informal rules among a set of people, communities and the society as to how women and men should behave on the basis of their gender.

It may seem innocuous on the surface, but when we set rules and expect our children and those around us to behave as per their gender roles, we not only pass it on to the next generation but also inhibit their natural development and constraint their personalities.

While we practice and perpetuate these norms knowingly and unknowingly in our homes, relationships, educational institutions and workplaces, we unconsciously promote others through our so-called harmless opinions and casual remarks. How often have we passed remarks like women are bad drivers, girls do not have an affinity towards Maths, women coming home late at night lack in character…based on our understanding and beliefs how men and women are supposed to be?

Households or families are the primary institutions that sow the seeds of gender socialisation. Right from birth, children absorb and internalise gender definitions into their constantly developing brains. So, all the gender norms – equitable and inequitable – seen and experienced are perceived as acceptable and normal behaviour. Of course, human behaviour is dynamic and attitudes and beliefs change all the time as we navigate time, places, experiences and contexts.

But it goes without saying that our home environments are one of the most fertile grounds which shape our earliest beliefs, setting the foundations of whether to accept or reject such gender norms. Children who have grown up seeing an equitable relationship between their parents or witnessing both women and men being given equal opportunities and spaces evolve to be confident, sensitive and open-minded adults with a healthy attitude and respect towards/for the opposite sex.

Children’s personalities are shaped through the internalization of gender norms and practices. These norms quite often limit their full potential and personality development. By conforming to the social and cultural notions of ‘masculinity’ and ‘femininity,’ children are forced to ignore their personality traits, interests and temperaments. While boys who are gentle and sensitive are often ridiculed as feminine and young girls who choose sports over studies are dubbed as tomboys.

Quite often, boys and girls who have seen their fathers and other male members doing domestic chores or see their mothers and other female members expressing their opinions freely grow up with the belief that there is nothing abnormal about it. They are more prone to practice the same and easily accept in others as well. Children certainly have a different view when the culturally defined roles of father/husband and wife/mother are shared, interchanged and adjustable.

One of the most common scenes in an Indian household is the ritual of having breakfast, lunch and dinner where quite often it’s the women who cook, serve, clean. While male chefs may have been gaining popularity for their culinary skills across the country, it hasn’t done much to change the kitchen rules in Indian houses. So, girls grow up conditioned to take up this domestic responsibility and are helped and encouraged to learn cooking early on. Along with serving families and guests, washing clothes and keeping the house tidy.

As parents, consciously and unconsciously we tend to establish two different sets of gendered roles for our boys and girls through segregation of tasks, skills and by setting our own skewed examples. Why isn’t cooking considered a life skill along with repairing cycles or electrical fuse boxes for both girls and boys alike? Why aren’t boys encouraged to pursue fine arts and girls to play football?

Boys who grow up seeing girls and women being submissive, docile and shy in their own homes, find it difficult to accept them being outspoken, opinionated and ambitious as adults. Especially when the behaviour of girls and women is closely associated with notions of honour, shame and prestige and family name. We have read umpteen stories in the hinterlands of India where girls wearing jeans, talking over mobile phones or interacting with boys have been punished, defamed and killed even.

Gender socialization among children occurs not just by adopting gender-appropriate behaviours, but also by observing adult members in the families, who are role models to children. Children who witness fathers abusing their mothers may become conditioned to accept violence in their relationships when they grow up.

Gender stereotyping often emanates from adhering to gender norms. ‘Assertive women are bossy,’ ‘men cannot be caregivers,’ ‘all women love shopping,’ are among the commonest opinions. Unfortunately, some of these gender-based comments have become so ingrained in our culture, responses and reactions that we have accepted them as the truth, failing to see that it’s much more than just a battle of the sexes. So much so that it has led to endless sexist and misogynist jokes on henpecked husbands, dumb females and disgruntled spinsters, condoning and justifying the prejudices and sexism.

While the gender expectations and stereotypes differ in different socio-cultural contexts and are at times subtle and indirect, there is no denying the fact that it is embedded in our lives and homes.

And if we want to build a gender equitable world not marred by violence, injustice, discrimination, indignity and unfairness, it’s high time we challenge the existing gender norms and stereotypes. Our own homes are the first places, to begin with. The way we bring up our boys and girls to accept and support gender-equitable norms and relationships is sure to impact young minds and transform beliefs, ideas and practices associated with gender.

Many people are already a part of this journey of change. We need to be a part of it as well. Acknowledging the prevailing practices of gender discrimination in our homes and becoming aware of our own biases and stereotypes is the first step. We do have the power and choice to bring about a change by establishing positive gender norms in our homes, communities and society. In our own ways.