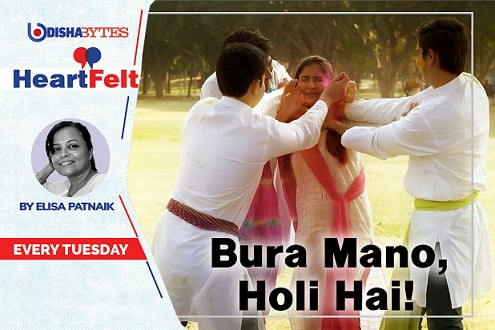 I used to love playing Holi for hours together as a child in our residential campus. But as I grew up, I started getting distinctly uncomfortable with the practice of playing Holi in large groups, enjoying only with a few select friends and family members. I also started getting conscious of my ‘safety,’ choosing dark-coloured, inconspicuous clothes, alert and ready to resist any intrusive boys or girls trying to forcefully rub colour on my face much against my wishes and always on my guard against inappropriate touches, the hurl of water balloons and buckets of water. And over the years, I have almost stopped joining in the community Holi revelries except for the gentle smear of gulal with family members and close friends or with very close groups with whom I feel safe and comfortable with.

Why has Holi — the great festival of colours heralding spring, signifying the triumph of good over evil and a day symbolising positive and fresh energies — turned into a dreaded celebration for girls and women where they are harassed, molested and violated? Why has consent taken a backseat in Holi celebrations where physical proximity and tactile gestures are taken for granted? Why has the day turned into an occasion where one is entitled to a free license to misbehave, grope and molest women in the name of bura na maano Holi hai?

Holi was traditionally meant to be a healthy and spirited festival fostering playful interaction between people, where both men and women were supposed to enjoy together with mutual consent, joy and respect. However, going by how it is actually played in extended families, societies, communities, institutions and on the streets of India, the reality is far from it. While men freely enjoy Holi and play it unabashedly, it continues to be a bitter, scary and creepy experience for women.

I am sure most women in India have at least one unpleasant experience where they were shaken by the harassment, excesses and drunken revelry associated with Holi celebrations. Behind the cheery colours of Holi and celebrations lies several dark and painful truths. The forceful rubbing of colours on the face, not sparing mouth, eyes and ears, hands transgressing to other parts of the body, water balloons targeted towards chest and rears, the vigorous chasing, lifting and dunking into water tanks and swimming pools, the pulling of clothes, the drunken revelry steeped in innuendos, the jostling and shoving, the piercing stares, the laughter at others’ discomfort…all such acts are accepted and continued in the name and spirit of Holi.

Many women have experienced harassment in mild or severe form at some point or other during Holi festivities. So much so that some have stopped playing Holi altogether. During Holi, it is so easy for strangers, especially men to inconspicuously blend into celebratory crowds, to act familiar and then transgress. It’s not just strangers or acquaintances, there are numerous instances where close male family members indulge in it too. Predators both known and unknown become unrestrained, raucous and violent in the battle of colours with a fervent zeal to harass women in the name of celebration.

It’s worse for single women, especially those outside the conventional heteronormative institutions of family and marriage. I remember a female colleague, who was single, narrating how a group of young men in her neighbourhood upon seeing her would break into lewd songs with sexual overtones during Holi. It is virtually impossible for single women or a group of women to venture out alone during Holi. If you do, you are asking for it. It’s as if men armed with a free pass are emboldened to harass, transgress, with little regard for consent.

It is not uncommon for gangs of drunken men to tease or chase women on the roads, even grab and forcefully apply colour or for young boys to throw water balloons at women from terrace and balconies. Sadly, a colourful and spirited festival has now turned into an occasion to display toxic masculinity, dominance and hooliganism.

Even worse is the perpetration of heinous sexual assaults and crimes during the festival. I still shudder remembering an incident in my university campus where a group of drunken, antisocial men out to have fun on Holi simply dragged a female student to an isolated corner to gang rape her. If you’re out and about in public spaces around Holi, you are game for molesters, stalkers and rapists eager to lay claim on you.

What men, and even sometimes women, fail to understand that it’s not right and not their right to forcibly apply colours, touch, embrace just because it is Holi. It is scary the way one could touch anyone anywhere in a crowd. It’s as if the carnivalesque and outgoing nature of Holi allows men to shed any semblance of decency and decorum to let go of their inhibitions. Those who decline to play or protest are branded as spoil sports, kill joys who do not enjoy the spirit of the festival. But the bottom line honestly is the belief that only men have a right to public spaces and women’s bodies.

While women have started speaking out against harassment by strangers and anti-socials during Holi, others are rarely able to express their outrage for the violation committed by their own male relatives and friends. I have seen women getting literally molested during Holi celebrations by male family members right in front of others and yet are forced/choose to remain silent, bound by family mores, embarrassment and fearing unnecessary attention and ostracization.

Sadly, the onus to a safe and enjoyable Holi and to curb such harassment as usual, lies upon women themselves. Ironically, a festival that is supposed to celebrate the coming together of people from varied backgrounds, to let you enjoy with your hair down breaking otherwise conventional social norms — is when women are yet again asked to curtail their mobility and engagement with community and public spaces to keep themselves safe. What’s worse is that it’s women who end up developing an aversion to the festival, are compelled not to venture out or locked up in the name of ‘safety’ with little right over their own bodies and public spaces.

Holi is certainly the festival of gay abandon for men. While men freely frolic and enjoy, women are busy either serving the guests or warding off inappropriate and violent behaviour by men. If girls and women want to enjoy, it has to be within the confines of a secure and comfortable group of people who will not transgress.

Worse is the de facto notion that ‘men would be men’ and hence misbehave. No one seems to think twice or question this very notion. While the harassment of women is socially sanctioned, the sufferers are chastised for not adhering to safety and propriety. Sometimes, the alcohol, bhang and other intoxicants consumed are even used as a defence to justify men’s inappropriate behaviour.

Besides the harassment, the way Holi is played with a sense of entitlement and violation of personal spaces and consent is worrying for women, children and other vulnerable people. The fact that raucous revellers cannot take ‘No’ for an answer is truly disconcerting. Apart from the physical pain and shock, women are made to believe that they are not welcome and safe in both private and public spaces.

Unfortunately, the glorified depiction of Holi celebration in popular culture, especially in regional and Bollywood movies, have contributed to the propagation of such conduct. Bollywood heroes are hell bent on colouring their coy lady loves by overpowering them and playing with their drenched chunaris and cholis. The so-called harmless and innocent flirtation, teasing, playful yet forceful smear of colours and water sprayed through pipes, drenched women in white, normalization of not seeking consent and vulgar lyrics of Holi numbers — all fuel the imagination of people wo can’t wait to enact the same.

The dismissal of such harassment being ‘fun’ and ‘harmless’ because of Holi and the hesitation and unwillingness of law enforcers and authorities to hold the culprits accountable not only emboldens the guilty but pushes women further into a corner.

Lately, it’s heartening to note campaigns around harassment of women during Holi gaining momentum. Organisations like Blank Noise and Breakthrough working on gender-based violence and women’s right to public spaces have been highlighting the harassment and demanding better accountability and responsibility from both authorities and citizens. Retail brand FBB a few years back launched an awareness campaign BuraNaKhelo on the dark side of Holi to ensure that women are respected and made to feel safe and for women to be affirmative and avert the status quo.

Holi is a festival where everybody has a right to enjoy and feel safe. Then why do we remain silent at this harassment and violation of women? Why do we push women indoors and restrain their participation in the Holi celebrations? The neighbourhoods, roads, parks, buses and metros are spaces for women too. Prevention of unruly Holi celebrations in public places through better policing, penalising harassers discouraging hooliganism and harassment of women in residential areas and encouraging women to speak out against such predators is imperative. Most importantly, the issue of consent is what needs to be addressed on Holi and teaching our children about consent and respecting women is critical. Moreover, this harassing tradition should not become the only version of Holi celebrations.

And as women, it is also time to raise our voices against such harassment in the name of Holi celebrations not just for ourselves, but for others as well. Let’s also fight to reclaim safe public spaces during such times. And definitely change the discourse of burra na maano Holi hai to burra maano Holi hai for such violations during Holi.