CBI’s FIR, accessed by NDTV, has Sisodia’s name atop a list of 15 accused. Others accused include excise officials involved in the liquor policy which was introduced last November before being scrapped on July 30, 2022. 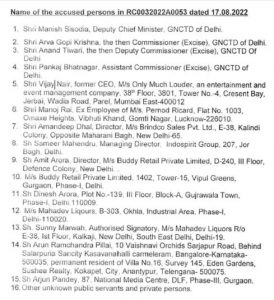 The charges against the accused in the 11-page document include criminal conspiracy and falsification.

According to the FIR, Sisodia and the others were “instrumental in recommending and taking decisions pertaining to excise policy for the year 2021-22 without approval of competent authority with an intention to extend undue favours to the licencees post tender.”

The CBI has claimed that Sisodia, who is No. 2 in the Arvind Kejriwal-headed AAP government and also the Excise minister, introduced a policy on who would be allowed to sell alcohol without the permission of Lieutenant Governor VK Saxena, who is the Centre’s representative in Delhi.

The L-G had sought a CBI inquiry.

CBI officials on Friday conducted raids and searches at 20 locations in Delhi-NCR, including Sisodia’s residence, in connection with the excise policy case.

AAP countered the CBI move by saying that Sisodia is being targeted because the Central government was furious at the praise, at home and abroad, for his education model, which was also featured on the front page of the New York Times on Thursday.