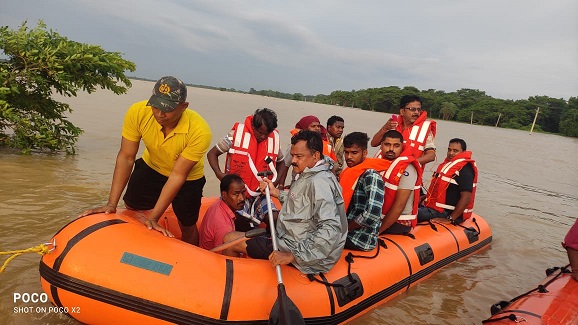 Bhubaneswar: With floods gripping several districts of the state, Odisha Fire Service personnel are in mission mode, rescuing hundreds of marooned people every day, from the elderly and women to patients and children. They have also been tasked with rescuing animals, clearing roads blocked by uprooted trees and distributing relief.

Fire Service personnel rescued a mother and her daughter from their inundated house on Friday from Dhanua under Tirtol block of Jagatsinghpur district.

A total of 44 Odisha Fire Service Response Teams have been deployed in the coastal as well as affected districts for rescue efforts. According to reports, Fire Service personnel have rescued more than 2,500 people so far since floods struck the state.