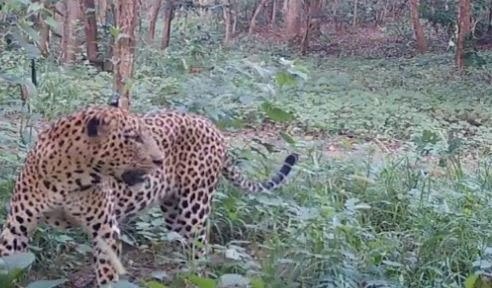 Dhenkanal: In a good news for the wildlife lovers, a leopard has been captured by the CCTV camera installed in the area under Dhenkanal forest division.

The Forest department did not disclose the exact location where the big cat was found nor confirm its original habitat. But the Forest officials said they found it moving in the forest from the footage of the CCTV on August 15.

Dhenkanal Divisional Forest Officer in a tweet said, “Here is our leopard in Dhenkanal Forests. It was August 15th as we pledged our commitment to conservation.”

It may be noted that the Forest officials had seized three leopard hides following raids in Kapilas sanctuary and Kalaspur village under Kankadahada police station of the district on December 7 last year. Three persons were also arrested in this connection.

Thundershower Likely In Bhubaneswar In The Next 3 Hours