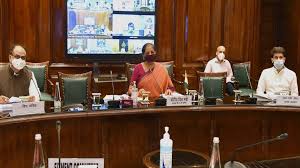 New Delhi: The Central government on Thursday announced the release of Rs 1.65 lakh crore as GST compensation to states for FY 2019-20, including Rs 13,806 crore for March.

“GST collection has been severely impacted this year due to COVID-19 pandemic. As per the GST Compensation Law, states need to be given compensation,” Finance Secretary Ajay Bhushan Pandey said after the 41st meeting of GST council.

He informed that the amount of cess collected was Rs 95,444 crore, reported ANI.

The secretary clarified that since there was hardly any GST collection in April and May, GST compensation for the period of April-July will be Rs 1.5 lakh crore.

According to Pandey, Attorney-General has said GST compensation has to be paid for a transition period from July 2017 to June 2022. Revenue has to be protected and compensation gap has to be met from the cess fund, which in turn has to be funded from the levy of cess.

The compensation gap has risen this year (expected to be Rs 2.35 lakh crores), due to COVID-19. Shortfall in compensation due to the implementation of GST has been estimated to be Rs 97,000 crores.

AG’s opinion is that the compensation gap cannot be met from India’s consolidated fund. So, the government is left with two options:

Finance Minister Nirmala Sitharaman said: “Once the arrangement is agreed upon by GST Council, we can proceed fast & clear these dues and also take care of the rest of the financial year. These options will be available only for this year; in April 2021, the Council will review &decide action for 5th year.”
On GST compensation to states, the minister said: ” The government will give a further relaxation of 0.5% in states’ borrowing limit under the FRBM Act as the second leg of Option I. There may be some states which may prefer to get hard-wired compensation rather than going to market to borrow more. An option was tailor-made considering that states can take a call depending on the compensation they expect to come.”
Attorney generalFinance Minister Nirmala SitharamanFinance secretaryGST compensationGST Council
0
Share FacebookTwitterGoogle+ReddItWhatsAppPinterestEmail