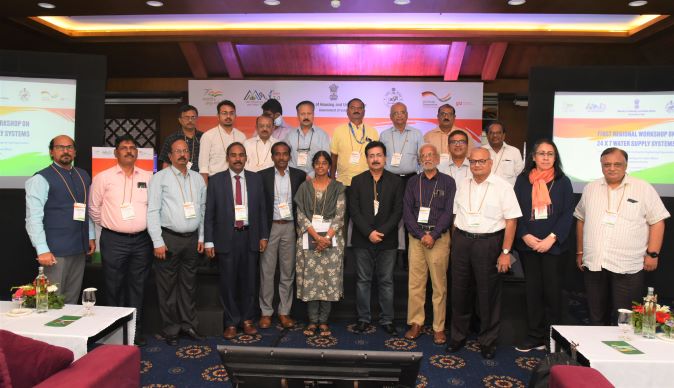 Puri: A team from Central government has appreciated the Odisha government’s round-the-clock water supply under the ‘Drink from Tap Mission’ in Puri town.

Speaking at the first ‘Regional Workshop on 24×7 Water Supply Systems’ in Puri, organised by the Ministry of Housing & Urban Affairs (MoHUA), D Thara, Additional Secretary & Mission Director, AMRUT, MoHUA, said, “Puri is the living laboratory of 24×7 water supply system where ‘Drink from Tap’ quality water is provided to its all 33,300 households covering more than 2.5 lakh population along with 20 million plus pilgrims annually. Puri is the 1st ever city in the entire country till date to do this. We all should learn from this unprecedented process to replicate in other cities.”

She further said the Prime Minister launched AMRUT 2.0 on October 15, 2021 with a vision to make all cities water secure and provide universal coverage of water supply services in all the urban areas of the country. One of the outcomes of AMRUT 2.0 is to provide 24×7 water supply with drink from tap facility in at least one ward or one DMA in all 500 AMRUT cities.

G Mathi Vathanan, Principal Secretary, Housing & Urban Development Department, Odisha said 24×7 water supply is the need of the hour to improve the service delivery and steer the economy by improving the livelihoods of the urban population. “Odisha became a pioneer with its transformative ‘Drink from Tap Mission’ as the department was determined to provide quality water supply at the doorstep of its entire urban population. Chief Minister Naveen Patnaik was also very supportive towards successful implementation of the project,” he said.

‘Drink from Tap Mission’ called ‘Sujal’ was first launched on October 13, 2020 by Chief Minister Naveen Patnaik to provide quality drinking water, fit for direct consumption from the tap to all households in urban areas. The Mission is a flagship initiative by the Water Corporation of Odisha (WATCO) under the Housing & Urban Development Department. Pn July 26, 2021, the Chief Minister dedicated the Mission to entire Puri city.

The two-day workshop, held on September 29 and 30, aimed at a meaningful interaction between the members of National Task Force and State Task Forces from the participating states like Andaman & Nicobar Islands, Andhra Pradesh, Assam, Karnataka, Kerala, Odisha, Sikkim, Tamil Nadu, Telangana and to disseminate knowledge and extend handholding support to states and cities for converting from intermittent water supply to 24×7 water supply systems.