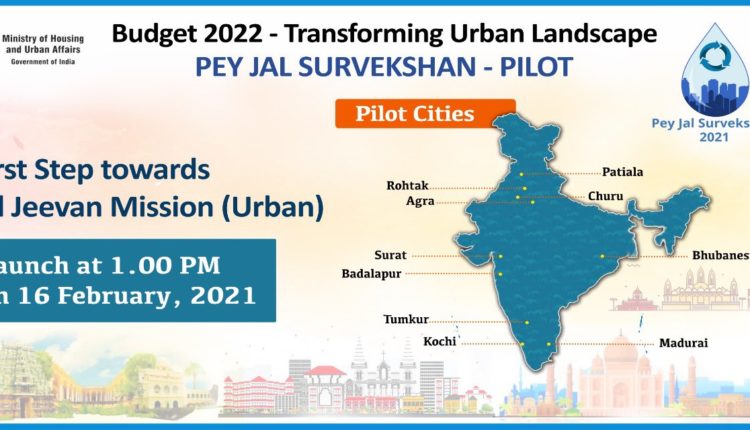 New Delhi: The Central government on Tuesday launched a pilot project of ‘Pey Jal Survekshan’ in 10 cities including Bhubaneswar.

Launching the project under Jal Jeevan Mission- Urban, Durga Shanker Mishra, secretary, Ministry of Housing and Urban Affairs, here informed that ‘Pey Jal Survekshan’ will be conducted in cities to ascertain equitable distribution of water, reuse of wastewater and mapping of water bodies with respect to quantity and quality of water through a challenge process.

“As the first step, the Ministry has decided to launch a pilot on Survekshan in 10 cities namely Agra, Badlapur, Bhubaneswar, Churu, Kochi, Madurai, Patiala, Rohtak, Surat and Tumkur. Based on the learnings of the pilot, it will be extended to all the AMRUT cities”, he said.

Data on drinking water, waste water management, non-revenue water and condition of 3 water bodies in the city will be collected through face-to-face interviews with citizens and municipal officials as per the approved questionnaire, on-call interviews, water sample collection and laboratory testing, and field survey for non-revenue water.

The mission will be monitored through a technology-based platform on which beneficiary response will be monitored along with progress and output-outcome. Funding from Government for projects will be in three tranches of 20:40:40.

Jal Jeevan Mission (Urban) (JJM (U)) is designed to provide universal coverage of water supply to all households through functional taps in all 4,378 statutory towns. Besides, sewerage/septage management in 500 AMRUT cities with the objective of making them water secure are the focus areas under JJM (U). Estimated gap in urban household tap connections is 2.68 crore and estimated gap in sewer connections/septage in 500 AMRUT cities is 2.64 crore, which is proposed to be covered in JJM (U), according to a press release of the Ministry.