Changing Prediction By Weather Models Amid Speculation Of Storm This October; Check Here 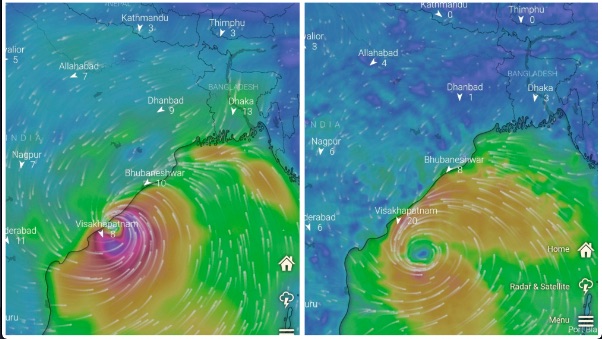 Bhubaneswar: While the India Meteorological Department (IMD) has forecast formation of a low-pressure area over southeast and adjoining central parts of the Bay of Bengal around October 20 with ‘moderate’ chances of its further intensification, both European model ECMWF and US weather forecast model Global Forecast System (GFS) on Friday showed an intensified system near Visakhapatnam on October 23.

According to the GFS, the storm is likely to make landfall on the Andhra coast on October 23 and pass near Vijayawada off the coast of Andhra Pradesh.

Earlier, both were showing the system near the Odisha coast.

On Wednesday, IMD DG Mrutyunjay Mohapatra told the media that there is no forecast for a cyclone in the next 7 days and no threat for Odisha. Stating that a forecast made seven days in advance is more reliable and accurate, he added, “The prediction is made after analysing several models, which may keep changing.”

Notably, the US weather forecast model on Monday indicated the possibility of a supercyclone in the Bay of Bengal between October 18 and October 25. “A depression is likely to form on October 17, which is expected to intensify into a cyclonic storm by October 18,” weather expert Mostafa Kamal Palash, a PhD researcher on weather and climate at Saskatchewan University in Canada, was quoted as saying by Business Standard. He also noted that the cyclone may make its landfall anywhere between Andhra Pradesh and Bangladesh with a wind speed similar to that of Cyclone Amphan.

The MeT had then urged people to not fall for rumours about an impending cyclone.

Also Read: Fresh Low Pressure Over Bay By Oct 20; Will It Intensify Into Cyclone? Check What IMD & Experts Have To Say

The ESSO-Indian National Centre for Ocean Information Services has also predicted that the low pressure is likely to intensify into a depression by October 21 with 4-6mm/hour rain in Bhubaneswar on October 24.

Meanwhile, senior meteorologist Jason Nicholls said that low pressure can form near the Andaman Islands early next week. “The system can strengthen to deep depression or cyclonic storm before threatening east India next weekend,” he tweeted on Friday.

According to private forecaster Skymet Weather, the cyclonic circulation over extreme East-Central BoB will move over the central parts on October 17. It is expected to consolidate further and turn into a low-pressure area over west-central BoB on October 18. “Looks like the weather feature will remain parked over the sea for the subsequent 2-3 days, albeit gathering pace and force. It is likely to shift closer to the coastline of South Andhra Pradesh and North Tamil Nadu, during this period. It seems to be breaching the coastline and move inland on October 22,” it added.

It has forecast heavy rain for South India.

It is pertinent to mention here that the IMD has predicted all cyclones correctly within a 45-kilometre error limit since 2013.