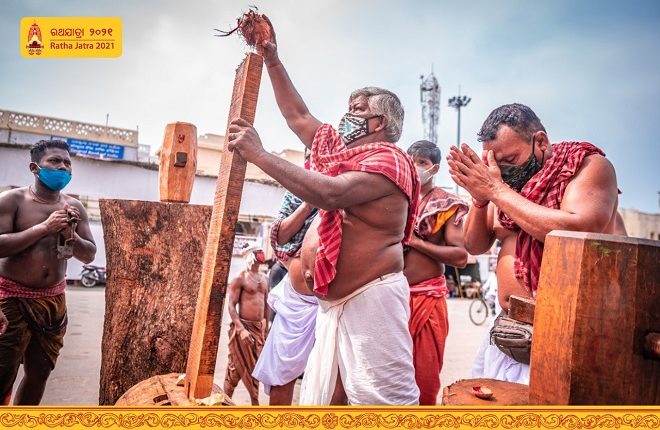 Puri: Chariot construction work resumed on Friday in Puri after a two-day break due to Cyclone Yaas.

On the 14th day (today) of construction at the Ratha Khala, “Bindha” and “Theka tulia” work of “Tumba” along with “Guja” is going on in full swing.

The ritual of “Singada baadia” was conducted in which spokes were fitted in the “tumba” followed by the “Pai anukula” niti.

The work had to be suspended after heavy rain and wind alert owing to Cyclone Yaas which struck the state on May 26. Heavy rain and strong winds lashed the pilgrim town where the Chandan Yatra of Lord Jagannath and his siblings in being conducted from Akhaya Tritiya day.

It may be mentioned here that in view of Cyclone Yaas, Chief Administrator, SJTA,  Krishan Kumar and Collector Samarth Verma held a review meeting on May 24 wherein it was decided to suspend the Rath construction work for two days in view of the impending cyclone.

With the rise in the number of servitors testing positive for COVID-19 at the Rath Khala (chariot construction area) the Puri administration has decided to create a bio-bubble and restrict movement of public.