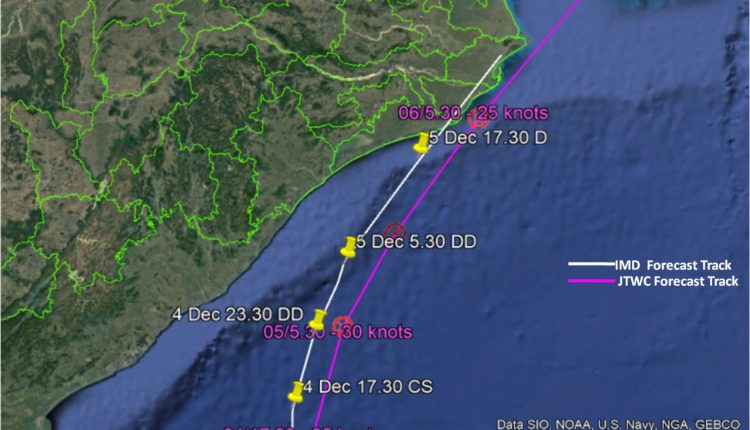 Bhubaneswar: Odisha heaved a sigh of relief when Special Relief Commissioner PK Jena on Saturday informed about the weakening of Cyclone Jawad into a deep depression before reaching Puri coast on Sunday.

“The system is likely to weaken gradually and move nearly northwards during the next 12 hours and then north-northeastwards along Odisha coast reaching near Puri around Sunday noon as a Deep Depression. Subsequently, it is likely to weaken further and continue to move north-northeastwards along Odisha coast towards West Bengal,” the IMD said in its special bulletin.

According to the IMD’s forecast track, the system is likely to touch the landmass in Odisha around 5.30 pm on Sunday. The Joint Typhoon Warning Center’s (JTWC) track, however, does not touch Odisha but passes close to the coast, which is different from Friday’s prediction when it was clearly within the state.

While the IMD has issued Red warning of heavy to very heavy rainfall at isolated places with extremely heavy falls at one or places (more than 20 cm) in Ganjam, Puri, and Jagatsinghpur for Saturday, squally winds, speed reaching 45-55 kmph gusting to 65 kmph is likely to prevail along & off north Andhra Pradesh-Odisha coasts during the next 12 hours. It will gradually increase to 55-65 gusting to 75 kmph till Sunday morning and then witness a slight drop to 50-60 kmph gusting to 70 kmph till the afternoon. It would decrease thereafter gradually.

The MeT office has also warned of heavy to very heavy rainfall (Ornage warning) at one or two places in Balasore, Bhadrak, Kendrapada, Cuttack, Khurda, Nayagarh, Gajapati, and Jajpur. Heavy rainfall (Yellow warning) is also likely at isolated places in Kandhamal, Rayagada, Keonjhar and Mayurbhanj till 8.30 am on Sunday.

On December 5, Orange warning of heavy to very heavy rainfall is very likely to occur at one or two places in Mayurbhanj, Balasore, Bhadrak, Kendrapada, Jagatsinghpur, Jajpur, Cuttack, and Puri. Besides, heavy rainfall is also likely at isolated places over the districts of Keonjhar, Angul, Dhenkanal, Nayagarh, Khurda, and Ganjam.