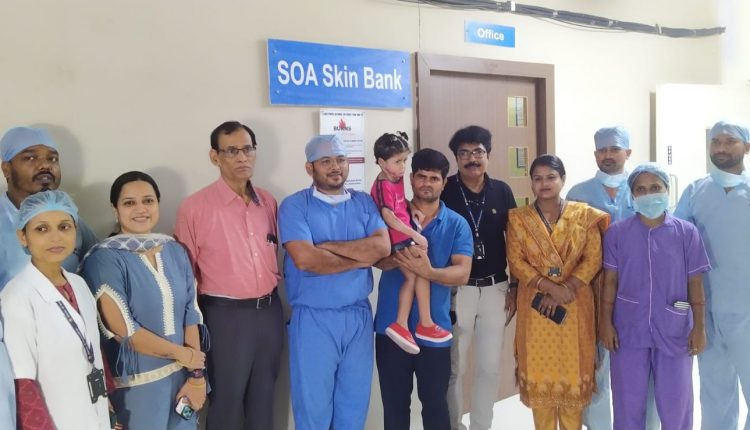 Bhubaneswar: A four-year-old girl, who suffered 30 per cent burn injuries following an accident, has been treated successfully at the Burn and Plastic Surgery department of Institute of Medical Sciences and SUM Hospital here.

Pragyan Priyadarshini Sahoo was brought to the hospital with deep burns on her face, neck and upper limbs in a mishap in which her mother suffered over 90 per cent burns. Despite best efforts of doctors, nurses and paramedics, the child’s mother passed away.

The child was managed at the ICU with aggressive treatment including daily dressing, administration of high antibiotics and other supportive medication. She also underwent two sessions of surgery, including skin grafting over the wounds, with her father donating the skin.

The four-year-old responded well after the surgery and was discharged from the hospital after around 40 days. She may require another surgery later for correction of minor post-burn contractures.

The child was admitted and treated under Dr Rajesh Gantayat, Assistant Professor, Plastic Surgery. The entire department — headed by Prof. Susant Mishra, along with Prof. Binayak Mishra and Dr M. Lopamudra, all Associate Professors — assisted in the treatment.