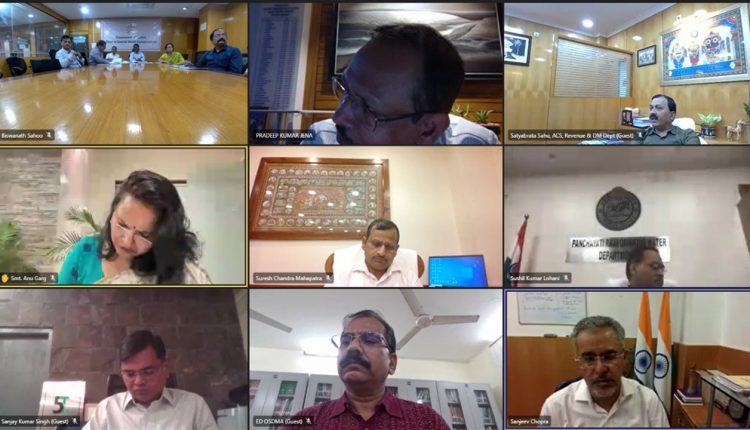 Bhubaneswar: Having won global accolades for efficiently handling calamities, the Odisha government is now all set to invest around Rs 400 crore to further strengthen the state’s disaster management capacity with modern equipment and training to the frontline units.

This was decided in the State Executive Committee meeting held on digital mode under the chairmanship of Chief Secretary Suresh Chandra Mahapatra from Lokseva Bhawan on Wednesday. Development Commission and Special Relief Commission (SRC) Pradeep Kumar Jena outlined the issues for discussion.

Considering the changing climatic scenario, the committee decided to further strengthen the disaster management capacity of the state with latest modern equipment and intensive training to the frontline organisations like ODRAF and Fire Service Units.

The chief secretary directed Housing and Urban Development department to remove the encroachments on drains and keep those properly widened and linked for smooth passage of rain/storm water.  He also directed the department to enhance the in-house capacity for instant urban flood management.

It was decided to have more modern relief and rescue equipment including the support for drinking water supply and water evacuation during the disasters.

Mahapatra also gave direction for building more flood shelters in flood prone areas. The officials were asked to identify the flood prone villages having insufficient flood/cyclone shelters so that people could be housed there during natural calamities. More number of flood shelters would also be helpful in providing emergent relief to the people of the marooned villages.

It was also decided to strengthen and heighten the flood embankments in the vulnerable areas like Bari, Dhamnagar, Gop and other river side villages as a permanent measure.

Discussions in the meeting showed that around Rs 400 crore would be invested for sharpening the teeth of the disaster management system, and empowering the front line organs engaged in mitigating impact of the disasters.

Development Commissioner Jena asked the departments to submit utilisation certificates against the SRC grants already released to them for relief, repair, restoration and distribution of various assistances to the people.

The proposal for Post Disaster Needs Assessment (PDNA) was discussed in the meeting. It was decided that a quick PDNA against the last heavy rain and flood would be conducted. After proper assessment of the needs, additional support would be mobilized for long term recovery, reconstruction, recovery and future damage reduction.

The SRC appraised that the PDNA would be conducted in collaboration with National Disaster Management Authority and National Institute of Disaster Management. The sectors like housing and resettlement, protection of civic amenities including the health and educational infra, drinking water, local critical infrastructure needs like roads and bridges would be the principal themes for PDNA. Chief Secretary Mahapatra directed to complete PDNA in about a month.