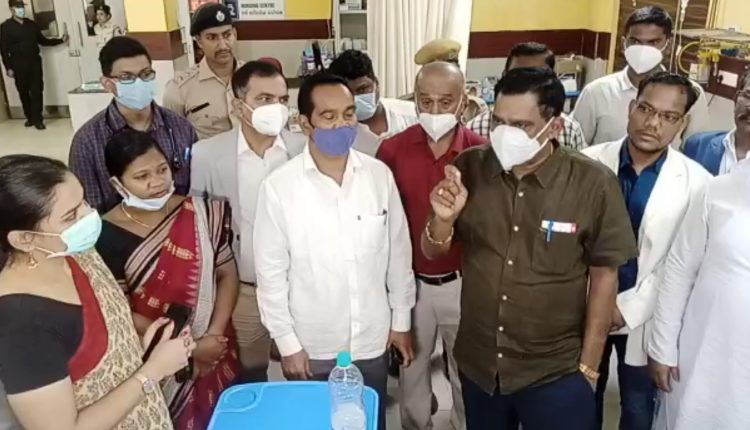 Rayagada: With the cholera toll rising to 9 in Odisha’s Kasipur block of Rayagada district, two ministers on Saturday visited the affected villages to take stock of the situation.

Health and Family Welfare Minister Naba Kishore Das and Law, SC & ST Development Minister Jagannath Saraka along with a team of health officials went to the hospitals where the patients are undergoing treatment and enquired about their condition. They discussed the progress of the patients, their treatment and available facilities  in the hospitals with the doctors there.

The two ministers also interacted with the families of the patients and went around the water sources used by the villagers for drinking purpose.

Speaking to media persons after the visit, minister Das said the government is aware of the situation and Kasipur block is on its focus now. “Chief Minister Naveen Patnaik has always given top priority to health. He has directed me to resolve all health related issues in the block. I will hold a review meeting on the situation with the district collector and health officials and instruct them to ensure adequate supply of drinking water to the villagers,” he said.

The minister said considering the seriousness of the situation, Public Health Director and a team of health officials are moving to different areas of the block to keep watch on the situation. “I will also review the circumstances that led to outbreak of the disease and what steps need to be taken to prevent its spread to new areas,” he added.

On the casualty due to the disease, the minister said it was caused by consumption of contaminated water caused by monsoon rain. The Health workers, members Anganwadi centres and Aasha workers are promoting awareness about taking preventive steps against the disease like boiling water before consumption, maintaining hygienic environment around the house and not going for open defecation.

Meanwhile, the number of persons who succumbed to cholera has gone up to 9 in the block. Arjun Majhi (50) of Dengaguda village, who was undergoing treatment for cholera in a hospital for the last two days, returned home on Friday night. But he died on Saturday morning.

Four patients have been shifted to district headquarters hospital after their condition deteriorated. Later, one of them was admitted to SLN Medical College in Koraput as his condition turned critical.

At present, more than 75 persons suffering from the water-borne disease are undergoing treatment in 4 hospitals of the block.