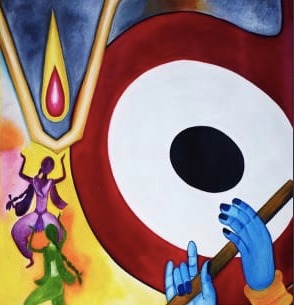 Bhubaneswar: Artist Jyotsna Meher from Odisha has been winning accolades for her chronicle paintings, mainly on different Gods.

With 16 exhibitions of her creations in Delhi, Chandigarh, Kurukshetra, Hisar and Bhubaneswar under her belt, Jyotsna held her third exhibition in Odisha titled, “A journey called Jagannath”, at Patia in Bhubaneswar from June 23 to 25.

Speaking to Odisha Bytes on the sideline of the exhibition, the artist said she never had any professional training on painting, though she has been attracted to the art form since her childhood. “I am a self-taught artist. Paintings have fascinated me since my childhood. I started painting out of curiosity and gradually with encouragement from my family and friends went on to become a professional,” she said.

Her natural instinct and interest in painting led her to research on different techniques of great artists. “The research helped me improvise my own works. Starting from water colour and paper, I moved on to dabble in oil pointing on canvas. As different new ideas came to me, I diversified my creations,” she said. Later, she obtained a degree in Fine Arts and is now working as a teacher in Haryana.

Her paintings have alluring and charming depictions of Gods including Lord Jagannath, Lord Shiva and Lord Ganesh. In the course of painting, she found chronicle of paintings held her special interest.

She has produced several series of paintings including one on Lord Ganesh by using only first alphabets of Lord’s name. On the idea behind this concept, she said, “It was something new and different which I tried to experiment. The out of box idea attracted her fascination,” she said.

Though born and brought up in Hisar, Haryana, Jyotsna remains connected to Odisha in more ways than one. She finds Lord Jagannath highly captivating since childhood. Every time she visited Odisha, the beauty of Lord Jagannath inspired her to paint and depict the Lord in a mesmerising way.

Her paintings have a distinct way of presenting Lord Jagannath with one eye which speaks a lot more stories than one can read. Apart from the Lords, nature is another genre that finds depiction in her paintings.

Speaking on her inspiration and support during the artistic journey, she said her husband has been her greatest support.  “He has always encouraged me to move forward. Whenever I felt let down by criticism, he used to come to my support and guide me to refine my art form with positive takes from the critics. From travelling to holding exhibitions, he has been the most active partner. I credit all my success to him,” she signed off.