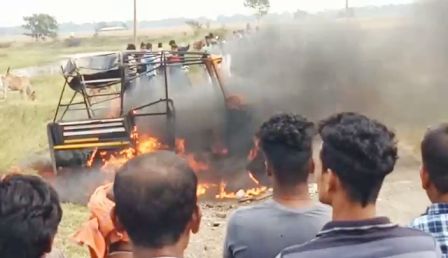 Kendrapara: A girl studying in Class II was killed when an auto-rickshaw overturned near Gara Chhak in Pattamundai block in Kendrapara district on Saturday morning.

Four other students and a female teacher were injured in the accident.

According to the reports, the auto-rickshaw was carrying 15 students to Saraswati Vidya Mandir at Oupada when the driver lost control of the vehicle. It skidded off the road and overturned, killing the girl on the spot. The driver then fled the area.

Soon after the incident, locals rushed to the spot and brought out the injured students from the vehicle. They then admitted them to the community health centre (CHC) in Pattamundai.

The irate locals also set fire to the auto-rickshaw.

Police said they were trying to nab the absconding driver.